Book of the Month January

So at the beginning of the year I suspended my Owlcrate in order to reevaluate and I was pretty proud of myself for doing it actually. Little did I know that within a few days I’d break down and sign-up for Book of the Month Club .

The subscription is $14.99 a month for one hardback book. You can add up to two books for an extra $9.99 each. And you can skip however many months you want with the subscription being rolled over. The one catch is that there’s only five books a month chosen by judges.

You make your choices between the 1st and 6th of the month and the box ships on the seventh.

My choice for January was Girls in the Moon (and the books come with a little blurb by the judge that chose them). I think this one had me at rock and roll and sexy poetry flirt-texting. But honestly I would have been happy with four out of the five books and looking back over older selections- there was plenty that I already had on my list.

The second catch is that if you want any books from older selections you do have to choice a monthly book first.

I also picked up Dark Matter by Blake Crouch…

I’d heard a lot of good things about this book which is about a teacher whose abducted one night and then wakes up in a world that he doesn’t recognize where he seems to be living a completely different life than the one he remembers. I’ve actually already read this one and maybe my expectations where a little high because it was okay but I didn’t love it. I was expecting more of a thriller for some reason but you can figure out what’s going on pretty fast.

It’s still a good fast read though and would probably make a good movie. 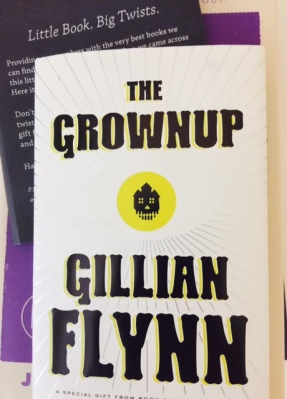 The GrownUp by Gillian Flynn which is a very twisty tale of a con-artist pretending to read palms who actually does try to help a rich woman in a house that may or may not be haunted with a stepson who may or may not be possessed (or just a sociopath). It was another quick, enjoyable read. This one was published before in one of the Rogues collections (the books that always make me think of the book Martin isn’t publishing

I’m not sure how I felt about this one. I actually think I would have enjoyed the story more as a full on novel. While reading some reviews of the box I read a couple of people who thought this was a children’s book because it was small. No. No. I’m sure Gillian Flynn would write some kickass children’s stories but yeah, this isn’t one.

So overall I’m pleased with the box. All of one month I know but I’m going to let the subscription renew! I still get book mail but I don’t have to worry about duplicate books or all the superfluous (but often adorable!) items that other boxes supplied.