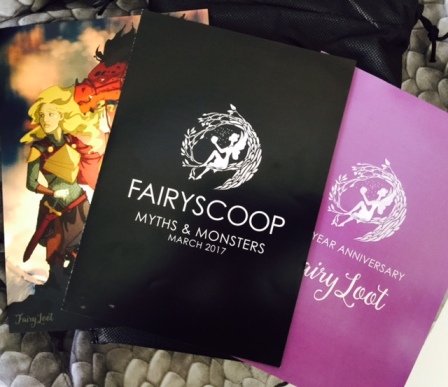 Last time I got Fairyloot was last September and I liked the box a lot but at fifty dollars it was too much for a monthly thing. However I absolutely couldn’t miss the March box- not only did I have a pretty good idea of what the book was going to be it was their one year anniversary hence a special box!

Let’s talk about shipping this time out. Shipping was awesome. Fairyloot ships from England and the September box took about two weeks which wasn’t bad (or tracked) but this box shipped on March 23rd. I got a text from the shipping company the next morning that the box would be delivered on March 27th and I was like, “No, it won’t.”

But I had the box by five o’clock that Monday. It only took a weekend! Plus it was tracked. Plus it was the same price as what I paid for non-track shipping in September which was awesome for me.

Silver Dragon Scale Scarf (background of all the photos) created exclusively for the box by GivArt. I’m not a scarf person but I could see myself wearing this one. It’s really nice quality. It feels very soft and highly wearable even in Spring.

Unicorn Fairy Lights by Mustard. These aren’t something I would ever buy for myself but they’re cute. Also it doesn’t seem like they take up a lot of space I can just put them around my desk or something and they won’t be too obtrusive.

The Mermaid Pocket Mirror by Book Otter. There was an Owlcrate box a while back that had a mermaid pocket mirror but was smaller and I think it was just the scales. I honestly like this one a lot. I like the art (it’s another exclusive to the box) and it’s large enough that I find it more useable than a tiny little one.

Dragon and Phoenix Magnetic Bookmarks by Bonitismo. I have a ton of these magnetic bookmarks now (I just ordered six of my favorite female characters) but these are absolutely too cute for words and I will definitely use them.

My favorite non-book item in the box?

Nephilim Candle by Geeky Clean. This smells amazing! I actually like my candles to have strong scents and the Black Cherry totally pops. This is another exclusive which is a shame- they probably won’t sell it so I wish this one was full-size. It’s going to burn fast.

The book! The book! 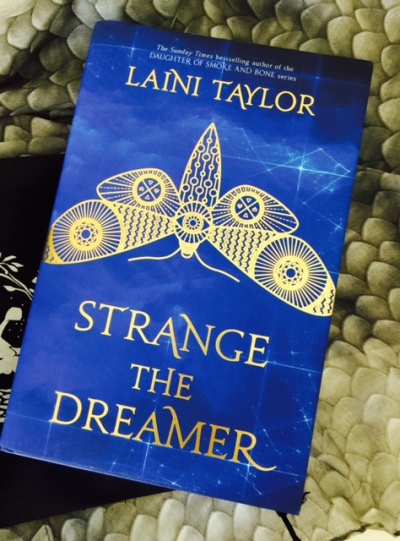 Strange the Dreamer by Laini Taylor

I was sure from the description it was going to be this book and I was so, so happy. The book is gorgeous (it’s a special U.K. edition) and I’ve been waiting for this one for such a long time now.

It has blue pages! Which means it’s going to go with my black and red paged Six of Crows series!

It’s beautiful on the inside and signed. Now not to insult authors (I have crappy handwriting myself) but I do love that you can clearly read her signature here. I’ve gotten a couple of bookplates where the signature didn’t even look like the name and one “signed” edition of a book from Barnes and Noble that was literally just a slight swirl of a slash on the first page…

I was just so happy with the book that this might actually be my favorite book box yet! On the plus side I’m almost halfway through the book and loving it! The hero’s nose is broken by a book of fairy tales!

(The only slight downside is that it’s a duology so I’m definitely going to need the matching edition of the second book.)

Needless to say I am super pleased with the March Anniversary Fairyloot so much so that despite my promise to myself I let the subscription roll over for another month!