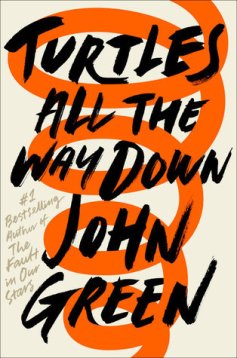 Turtles All The Way Down

Aza and her best friend Daisy are trying to solve the disappearance of a local millionaire for the cash reward. But Turtles isn’t about that so much as Aza battling her anxiety and OCD and that’s what makes this is a hard book to rate for me. Because it is a book where everything else aside I relate,  I relate so very much sometimes it was troubling to read.

“The merest schoolgirl, when she falls in love, has Shakespeare or Keats to speak her mind for her, but let a sufferer try to describe the pain in his head to a doctor and the language at once runs dry.”

“I was so good at being a kid, and so terrible at being whatever I was now.”

The guilt. The fear. The fear of your own body. Your own mind.

Yeah, needless to say it’s a little hard for me to judge Aza.

I know a lot of people have already written and talked about this book. On the one hand I do agree with the people who say the mystery wasn’t much or that important really. But I didn’t mind it and I very much liked the fact there was no fixing Aza, including by the boy. Did they all get a little philosophical at times?

Sure. In all honesty the biggest fan of Green’s other writing but I can’t say I didn’t expect the philosophy musings from teenagers.

I also wanted to give props to the friendship between Aza and Daisy which I think, besides the mental health issues, is the heart of the book. I haven’t read the full spectrum of mental health books but it annoys me sometimes how the friends are always portrayed as almost saintly. No problems dropping everything to help the main character. No lives of their own. No resentment along with the love.

Daisy, on the other hand, is a good friend but she’s also human. In fact she does something pretty wretched at one point. But she can’t always deal with Aza and her issues. She sometimes does resent the time and energy it takes and buries, buries things until it explodes because guess what? It’s not that easy to live with.

Family & Friends who Love Me: It must be difficult living in your head.

Me: And I try to keep the worst to myself!

Between them it felt like actual human friends dealing with this issue through the good and the bad and I was happy to see the strength of that bond celebrated even when it looked like it might be destroyed.

It’s a bit of an odd one I suppose. I can totally understand why some people wouldn’t like it and I think I over related to it a little too much in a lot of parts. Don’t go into this for the mystery it’s definitely more about the Aza and her dealing with her mental health but on that note it completely worked for me.