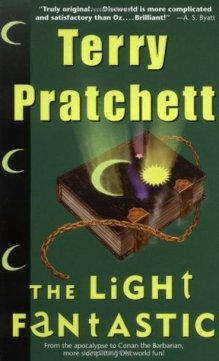 Rincewind continues to have one of those days in which nothing quiet goes right. Twoflower and his awesome killer luggage continue to explore Discworld which is seemingly hurtling toward a red cataclysm in the sky and none of our so-called wizards can stop it.

Well, except for the one whose looking to increase his own power.

The Bookworm Drinketh is hosting this monthly read along event for the Discworld series! So check out her post and links to everyone else participating!

I actually read the first book in the series The Colour of Magic last year and found it a bit disappointing. I’m so happy that wasn’t the case with this one. It just clicked more and it felt like it was moving along faster (probably because we are quiet literally dropped right into the story.)

This book also has Death, talking trees, Troll rocks and a geriatric Cohen the Barbarian.

Now when I picked up the series originally a lot of people told me I could skip the first one, in fact should, but I’m a stickler for order.

So can you skip?

It might be a bit confusing and muddled in the beginning but it’s really not that hard to follow and like I said the story moves fast. It’s more the characters and the interaction that make The Light Fantastic sing carrying the story through increasingly insane things. Though I think my favorite character might be the killer Luggage.

Should you skip right to The Light Fantastic?

Ah, skipping books in a series. Such a personal decision. The Colour of Magic does introduce everything and lay the ground work but I think the only thing I would keep in mind is that I enjoyed The Light Fantastic so much more. It definitely makes me want to continue the series whereas previously I wasn’t sure of it. The Light Fantastic isn’t perfect. Halfway through the book I realized I didn’t know what had happened to one of the main wizards and I’m not big on the depiction of the (few) female characters. Though I expect that to change.

Also the humor is definitely not going to be for everyone. This is a good book to test your yardstick for that before continuing the series.

But I’m psyched this reading event got me to delve back into Discworld!