So September was my third Scribbler Box (a box created for writers and curated by writers.) The theme this month was Breaking the Rules. And I must say its still on an upswing concerning the book though I do still have some issues with the box.

The book this month was…

And while I did read an arc of this I had planned on buying it regardless so to get a hardback with a signed bookplate! Yeah 🙂

Hopefully October will be one that I want/haven’t read/already bought. I do wish they’d give hints about the book. I can nearly always guess for Owlcrate and Fairyloot. It would be helpful.

Birds of a Feather Page Flags- which I absolutely love and I use page flags all the time. (You should see my copy of Muse of Nightmares.)

Big Heart Tea Co. Cup of Sunshine- according to the spoiler card this is caffeine free tea. I haven’t tried it yet though I’m not big on ginger and combined that with turmeric it’s gonna be zesty I would imagine.

A WWJKD Magnet- which I do love my magnets. I have a growing collection but this ones a bit creepy I must admit 🙂 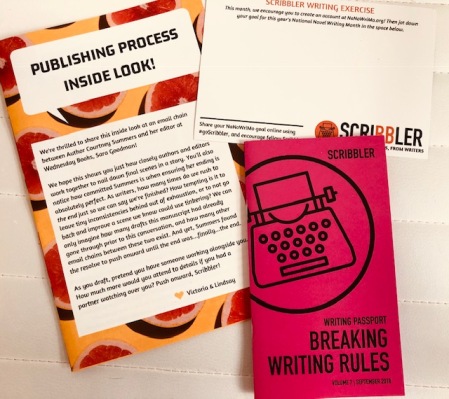 The crux of this box besides the book is the inside/behind the scenes information. For $29.99 a month you want it to be good stuff. And I have gleamed some tidbits in the past months I just didn’t on this one. It was all kind of like heard it before.

Still they’re super touting the Halloween box so I’m going to stick with it this month and check out the chat with Sara Goodman.

Hopefully they can nail the book and the insider information!