It’s Fall for a few more days right? And I’ve done this tag for every season this year so since blogging is one of the few things I’m consistent on I wanted to keep going! You can find the link to Zarriah Rose (original creator) and recommendations for: Winter, Spring, & Summer

Absolutely loved All Systems Red and all the Murderbot novellas I read this Fall. They’re quick reads and I’m very much looking forward to the character getting a full length novel soon!

Also Daredevil Season 3 was probably one of the best seasons of television I’ve watched in a very long time and definitely the most enjoyable and well-done of the comic book show genre. The shows been canceled from Netflix of course but you should still watch this season and at least, at least there’s some closure for my angst babies.

I’m am cheating a bit here because this was the first time I’ve read Good Omens but I know it will be an old favorite and probably is for many people. I cannot wait for the show next year. The audio book was very good as well. Sometimes I was convinced the narrator was David Tennant. Of course everyone could sound like Tennant and I’d be happy.

An interesting look at gender double-standards, sex, politics, relations, legal cases. I had never heard of this case but it’s fascinating and it will likely make you angry the more things change the more they stay the same as the old saying goes.

A recommendation that will help people escape? 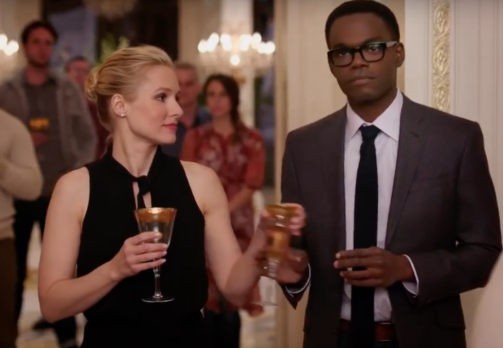 After fighting it for ages I fell completely down The Good Place rabbit hole (and holiday cooking championships but that’s a whole other story.) We follow four fascinating people through the afterlife along with Michael and Janet- a super AI who literally knows everything and is fast shooting up the list of all time favorite AI’s.

Hell, I’ve watched several episodes a couple of times. Not only is the show funny but really smart and thoughtful with discussions of philosophy, ethics, forgiveness, death, judgement and Blake Bortles.

The first two seasons are on Netflix and I’d definitely recommend giving it a go.