I started a A Song of Ice and Fire reread project because in my head for some reason I’m convinced if I take my time when I finish Dance of Dragons Martin will announce the long awaited Winds of Winter.

Plus I just really wanted to reread the books. However rereading Thrones was a bit odd.

It’s like watching a train wreck in slow motion. You just want to yell, “No! Stop that! Stay in Winterfell!” “Don’t do that!” “This will not end will for you!”

Also there are all these times in King’s Landing where Ned specifically thinks how he’ll make it up to Sansa once there home, how she’ll understand, how he and Cat can have another son and I just was shaking my head going no, no, there’s no time unless you get a little more ruthless buddy.

Yeah, Sansa had to stay so people didn’t suspect anything. I get that. But hell at that point Cersei actually hadn’t done anything yet and you could have just told them she was miserable after the wolves (she was) and sent her the hell home. Plus that may have stopped Cat from taking Tyrion.

I mean yeah maybe her being in King’s Landing would be odd but hey they parted under poor circumstances so she could say she wanted to see Ned again.

4. Mirri Maz Duur was wrong but also she had a point:

Dany: I saved you!

MMD: Ah, thanks for that but I had already been repeatedly raped, seen my home destroyed, children I knew since they were born brutally murdered along with the adults  but hey yeah thanks for the promise of a  life of slavery.

I actually think Dany’s desire to free the slaves is noble enough but there’s a bit of hypocrisy in the first book as she looks the other way when the Dothraki do it. (I wonder what she would have done had they actually made it to Westeros?) Grant you happy with Drogo or not Dany wasn’t exactly a free agent herself at this point so getting Drogo to bend even a little is a point in her favor but still I could see where MMD was coming from.

And when Dany does make concessions in later books in the name of ruling she gets pretty screwed there. I don’t buy the Mad Queen theory but it does seem like George tends to make her world black and white and her only real weapon against it are her dragons But that’s a story for later books.

5. “Look to your Khal and see what life is worth, when all the rest is gone.” MMD too Dany.

A quote that immediately made me think of Cat- Stoneheart. There’s a great scene where she speaks beautifully for peace because she knows what a war will cost (left out of the show but never mind) and she’s of course shut down for being a weak woman and then they took everything else from her and she became an actual monster. There’s a bit of warning in here for Arya who’s keeping to her vengeance and the sense of justice that (much like it did to Dany and her mother) the world around her inflicted on her.

6. Sansa’s Not So Shining Moment 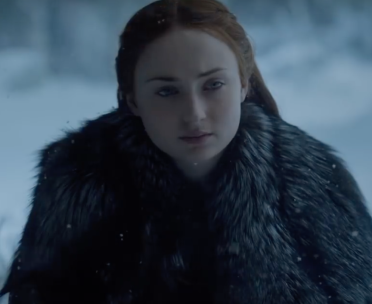 I love the book character much like Catelyn and will always defend her but there’s a bit in here that plays into the train wreck aspect where everything is going to hell and all the Winterfell men are being killed and she’s just like boy if only Jeyne would stop crying.

Yeah I know Sansa was probably putting up walls her to keep herself sane but still knowing what’s coming for Jeyne Poole you have to flinch at the whole, “Boy I’m glad she’s gone her crying was bugging me,” stuff.

And hell she’s even surprised when she finally thinks of her sister.

Overall I’m glad I reread it and look forward to going on with the project. I must admit though I skipped the part where Lady died and might do the same with the Red Wedding.

Game of Thrones: A