If I was to sum up Far From Home I’d say entertaining diverting fun but the most interesting stuff is in the credits teasing what’s to come for the MCU.

And Peter’s relationship with Tony and that’s not just me making everything about Tony 🙂 he looms large in Far From Home. 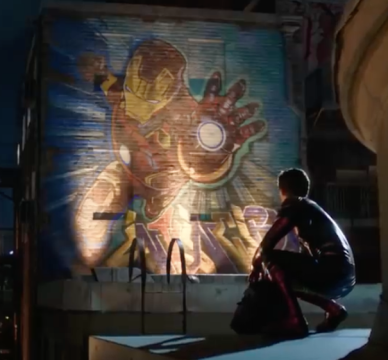 We do get a bit of how people are dealing with the snap. Mourning Iron Man, Nat and all those that were lost. I did enjoy the kid having an existential crisis because his younger brother was now his older brother. Everyone is trying to move on including Peter (Tom Holland) who wants to use the class summer trip to tell MJ (Zendaya) how he feels.

Meanwhile Nick Fury, Mysterio and some really big monsters are going to get in the way of that.

The performances are good and the settings are pretty. I didn’t really care for Mysterio at any point though. Jake Gyllenhaal is fine but the whole thing just feels so anti-climatic. Again there’s a mid-credit scene where it gets really interesting and you can intwine it with stories and fake news and people needing to believe in something all day long but that was at the mid-credits.

It was also nice to see Angourie Rice get something more to do. Unfortunately it involved Ned and I do not like him.

I did like Jon Favreau’s increased role as Happy and the change in his relationship with Peter. I love Peter Parker and his many father figures. Samuel L. Jackson was great as Fury but there’s stuff about his character that comes into play in the credits that changes my view of him in the movie.

Nice touch that even after death Tony’s still making decisions with Peter that have everyone going, “What was he thinking?”

So all in all it’s an entertaining film. It opens up some interesting things for the MCU as well as Spiderman himself. But you don’t really need to rush out and see it in theaters. You got plenty of time if you want to wait. Even the effects while fine wasn’t anything new and I saw it in 3-D!

Recommend: Overall yes. But see above.