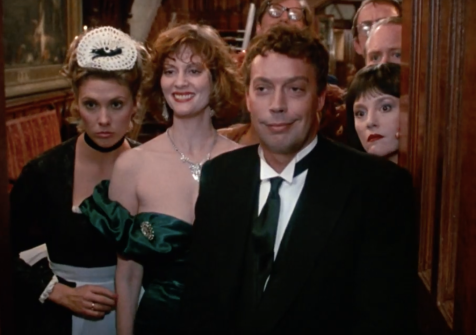 Admittedly I’m in a bit of a life slump this month. So I thought I’d do another Great Falls Films that are worth a watch and (in some cases any way) brighten a mood!

I mean these are all good films to watch any time of the year but there’s something about them all that scream Fall to me.

Clue is a classic of my childhood. I heard they were remaking this murder-mystery-comedy but I’m pretty much blacking everything out about that. Get new ideas people.

Also I will always love Mrs. White’s line about the death of her husband, “It was a matter of life and death. Now that he’s dead I have a life…”

Sleepy Hollow is just a fun film which is a strange thing to say about the tale of Ichabod Crane and the Headless Horseman. It looks a little iffy now but it’s got a great cast. I still need to read the Washington Irving story though!

I remember being surprised by how much I enjoyed The Illusionist because I am honestly not a big fan of Edward Norton or Jessica Biel. But I was fascinated by the time and place (a big chunk of the story revolves around the royals in late nineteenth century Vienna) and I really think the darker elements to his ‘illusions’ add to the atmosphere.

I even liked the romance in this one. Go figure 🙂

The Burbs is another fun one. If you ever want to see Tom Hanks have several break downs- over whether his new neighbors are actually killers – and Carrie Fisher being the voice of reason it’s worth a watch.

Probably don’t watch if you suspect your neighbors of being murderers.

A sibling disappears. There’s something in the woods. (Those amazing woods!) And a family falls apart. The most recent on the list and definitely the most unsettling. This one has amazing performances by Anya Taylor-Joy and Kate Dickie as mother and daughter.

Plus the director (Robert Eggers) new movie The Lighthouse is out so if you’re interested in that one it’s always worth checking out his first!