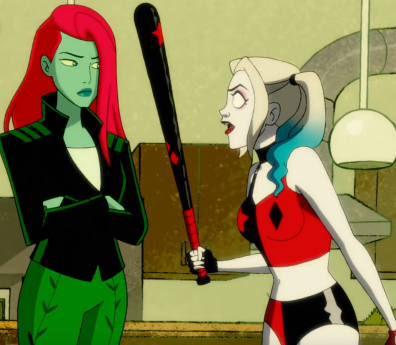 Harley here is basically me telling everyone to watch the show or at the very least give it a chance. I love Harley and Ivy but I’m not big on animated shows (or the DC Universe app) so I was still surprised by how much I enjoyed the show and how good it really is…

After finally breaking it off with the Joker (with an assist from Ivy) Harley Quinn decides to get herself a crew and become the criminal Queen Pin of Gotham City- which means getting a seat on the Legion of Doom.

So she finds herself the worst of the worst, as she says, and sets out on her conquering a wild vibrant and fun Gotham in which the villains are right out in the open (i.e. the Joker gets mad at one point because he needs a permit for a trap door in his lair) and there’s some deep pulling from the comics.

For me though the funniest episode was nemesis episode. I don’t want to give too much away but I would pay to see Jacob Tremblay and Margot Robbie’s Harley in a live-action showdown one of these days.

For all the fun of the show it actually deals quiet movingly at times with Harley and Joker’s relationship. I thought it had some interesting points that you don’t see often in  these arenas dealing with memory and abuse. Harley has literally forgotten big moments of this relationship and edited others to suit her narrative. Alan Tudyk is excellent as a jealous bitch of a Joker and Kaley Cuoco is really good as Harley. After the first couple minutes of episode one I never thought of Penny.

Other stands outs include Bane, Aquaman, Doctor Psycho, King Shark and freaking Kite-Man. Although he’s in it the perfect amount in this anything more I wouldn’t have been happy.

The entire 13 episodes of the first season is streaming on the DC Universe app. You can sign up for a 7-day free trial and easily watch them. Honestly at around 22 minutes an episode you can probably watch them all in one day!

There are two knocks I’ve heard on this show the first being that they didn’t make Ivy and Harley lovers (literally I saw people yelling about that after the first episode…) but considering they were concentrating on Harley breaking away from the Joker and going out on her own and Ivy’s trust issues that didn’t bother me in the least. 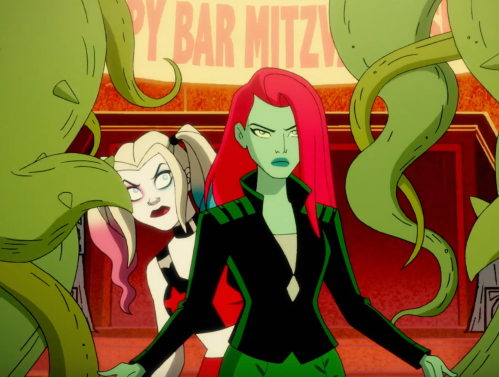 The creators say they will explore it in season 2 and, especially toward the end of the season, I definitely think they were laying the groundwork.

The other much more serious charge is that several jokes and things surrounding one character particularly (Sy) veers into the anti-semitic. I can’t speak to the anti-semitism but I will say the character in question is the most cringe both here and my least favorite from the comics. The creators have addressed that and I do hope he’s something toned down in season 2.

And speaking of season 2 the trailer dropped earlier today.

The show is back on April 3rd so if you do watch season 1 (and you should!) you won’t have long to wait!