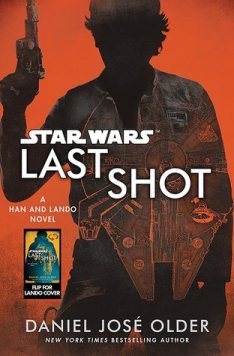 A Star Wars adventure with Han and Lando seemed just what was needed these days and while overall it was an okay fast read the book itself reminded me about why the Star Wars book world in recent years only infuriates me.

Okay first a recap. A couple of years into the New Republic (Ben is a toddler) Lando is attacked in Cloud City. The attack traces back to a weapon both he and his old buddy Han had a history with so the two team up to try and find it before the baddie can activate it.

Last Shot itself (before I get into the bigger universe thing) isn’t a bad book. Its ideas with the droids are interesting and creepy at the same time. But it’s just too much. Han and Lando get current POV’s and both separate ones about different stories in their past.

Plus we get a villain POV for a couple of chapters including his origin story and overall it just made the book feel too long and unwieldy. In the end I didn’t think the Han flashbacks were necessary at all. Could have dealt with his part in the story with a paragraph of two of exposition.

Also I’m pretty sure you will never make me care for Sana (his first “wife”) and that’s not just some loyalty to Leia. I don’t like her. I mean for Pete’s sake the time period is so weird when you add Solo into it why not just keep Q’ira? They’re kind of the same character anyway (at least here.)

But I’m pretty sure at this point Star Wars does not know what to do with it’s story-telling outside of Jon Favreau and we’ll see how he truly begins to connect everything going forward.

Plus there’s a lot of stuff in here about Han’s feelings on fatherhood, his son and his marriage. It’s good character work but for me at least some of this stuff belonged in the movies.

It’s a bit opposite with Lando. I actually think his two separate stories tied together really well and had some emotional heft but I’m pretty sure that’s because I saw Solo and I do have to wonder if I would have felt it as much otherwise.

So Last Shot was a bit of a mixed bag. Even taking out my problems with the larger story-telling the book has some issues on its own. But if you’re just looking for something fun and a visit to a galaxy far, far away it will probably do the trick for you.

Recommend: Sure. Why not?

And I don’t know if Disney would actually do some of the droid story in a film but they definitely should. Creepy.

Also if you want to get into Star Wars books I have to recommend my favorite: 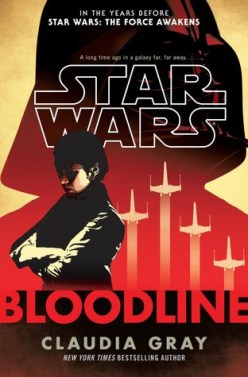 Not only was it a good Leia book but it was a great prequel to the Force Awakens (which now that I think about it Rise of Skywalker might have rendered that moot) but just mentally substitute the Senator dude that helps her for Poe and you have a fantastic start to their relationship!