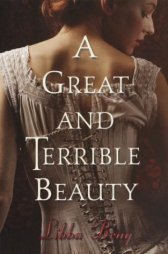 This could always be called books with red- headed main characters. Books I read for strange reasons.

Gemma Doyle returns to England after the murder of her mother and is immediately dropped in an all girl’s boarding school by her family. The main purpose of the school is to find the girl’s a husband. Among the strange things that start happening to Gemma include finding a diary out in the woods by the school as well as the arrival of a hot gypsy boy telling her not to do whatever she’s about to do.

Gemma has the power to open the door to another world. While in that world her and her friends can do what they want and be whoever they want to be. It seems like such a wonderful thing to take back to the main world so they don’t have to marry the horrible people their parents pick out for them, or be alone, or be poor and forgotten. I found her friends fairly understandable actually. Only per usual there’s a catch and the power itself might be a trap to free something horrible and bring it back into our world.

I liked this book a lot for about 85% of the story. Gemma and her friends were written very well. I was feeling for them throughout but toward the end it just started to drag for me. Even though I admit the unraveling of the mystery behind the journal and the original group of girls held at least one surprise. I knew it was a series and I think part of my problem with the book stems from the fact that after it was done and after reading a preview of the next one I had no desire to keep going forward.

Recommend: Torn on this one. I liked the book but my utter lack of desire to continue the series is odd for me. I’d say give the first book a try and go from there. I may just Wikipedia the spoilers for the next books.

I downloaded Ed Sheeran: A Visual Journey to my Kindle a couple of weeks ago when I was looking for “different” things. At the time the only song of his I had ever listened to was Everything Has Changed with Taylor Swift. If you’re a fan of Ed Sheeran you probably already have this and in case you’re wondering I do like him a little more after reading.

The artwork by Phillip Butah is the best part. You can feel that these two are long -time friends. The pictures are lovely and clear and had a life about them. As far as mode of reading I didn’t feel like I was missing anything by having it on a Kindle. There are a couple of videos here and there where you can hear the artist talk about his work. Since I don’t know the first thing about art the best parts of the videos were the personal.

Sheeran has worked hard but he’s pretty young and it’s fairly repetitive. He scrounges and saves, he makes and releases a record, tours, repeat and definitely don’t expect much in the way of dirt. The story and the artwork are perfect together because  they serve to lift each other up and compliment the other like true friends.

Recommend: Yes. Obviously if you’re familiar with either artist or like the idea of the book. It would also be a great gift for any Sheeran fans that you may have in your life.