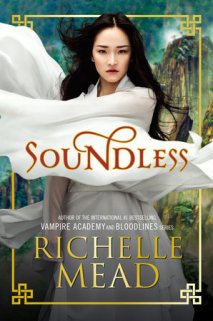 For generations people in Fei’s village have survived without the ability to hear high atop a mountain. With the passes long since blocked off by an avalanche and the only other way out a steep descent prone to rock slides they have subsisted by mining for a precious metal they send down a zip line in exchange for food.

Only now the people are beginning to go blind and the scarce food is becoming more and more  of a punishment. It seems like there is little hope until one morning Fei wakes up with the ability to hear returned to her. She and Li Wei, a mine worker she has a history with, decide to brave the climb and confront the line keeper to try to save their village.

This book came in the November Owlcrate (which I’ll talk about in a minute) I was a little lukewarm about getting it. I had it on my list but wasn’t exactly in a hurry to read it but I ended up really enjoying it. It’s a simple story but there was a lot of tension involved in it. A good bit of angry horror to at what is really happening.

I enjoyed the writing as well and usually I’m not that big of a fan of Mead’s. There’s an especially thrilling part on the mountain that I won’t describe in any detail. Suffice it to say my fear of heights was hit hard here. It’s also interesting because despite the conceit of the book it’s hard to remember sometimes that the characters are signing instead of speaking that no one but Fei can really hear whats going on. There are a couple of excellent moments of drama in the book where Fei wonders if it would be better that she couldn’t hear.

Now the actual fantasy element… it felt kind of off. I liked it but the book throughout was relatively grounded in reality. The cruelty and exploitations of humans who can’t help themselves being a big one that the it made the ending feel a little bit out of place. Yet not enough to really color the book for me.

As to November’s Owlcrate, minus the book, this was the first month I wasn’t overly thrilled:

The Adagio fairy tale tea was a nice touch but I’m not that much of a tea lover (especially caffeine free tea). I do however absolutely love the little box that it came in and will definitely be using that again.

A Camp Half-Blood Bracelet from The Colorful Geek that I will never wear. No offense to the bracelet it’s just not my thing.

The castle locket from The Geeky Cauldron is nice but again it’s not something I’d ever wear and I have to tell you just from a little bit of handling the locket part- so going to break easily.

The mirror has mermaid scales on the back (that’s from My Clockwork Castle) it’s fine and all but it reminded me of something quick and well, cheap that you’d pick up at a souvenir shop on a trip to the beach.

So aside from the book and the tin this was a disappointing Owlcrate for me. I’m telling myself the book made up for it but considering the price of the box is around $36 bucks after shipping I’m going to have to convince myself of that. I figure one more Owlcrate in the New Year and we shall see how that goes.