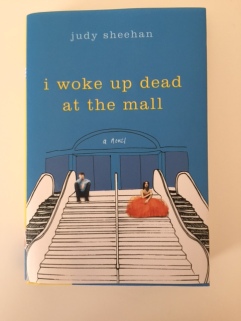 i woke up dead at the mall

I rarely just go to the bookstore and buy a book that I had never even heard of but this one called to me. I felt it you know? Honestly, if you’re going to have a stopping point between life and not life the bigger better malls aren’t a bad way to go. Food courts. People watching. Free clothes. Nice beds and places to sleep. Sarah’s at the Mall of America. Never been there but she has amusement park rides and an aquarium.

I’m just going to leave out my former job and all the things I still feel about it. Sometimes I imagine you can actually haunt a place in life or that the memories haunt you so much you feel that you are…

Sarah wakes up after her father’s wedding only to find that she was murdered and all murdered teens get to hang out at the Mall of America while they finish up their business. She’s meet by a heavenly pencil pusher and several friendly spirits and naturally a hot boy who had some other afterlife options but chose the mall.

Sarah has to navigate not only that but learning who her murderer was and try to save the person they’ve targeted next even though it’s breaking pretty much all the rules.

I enjoyed this one. Sheehan brought both the funny stuff and the moving and thoughtful moments. There’s some good resolution to most of the stories. I liked the fact that despite the way these kids died it’s a very hopeful book and they’re very hopeful characters. A couple of times throughout the book I expected it to go one way and it went another which I considered a good thing.

There’s even a celebrity cameo appearances that makes strange sense under the circumstances.

Really my only nitpicks where- I don’t think Sarah needed “special powers” thrown into the mix (come on with the special powers people!) and she gets really annoying with Nick at one particular point especially. I was rolling my eyes like, “Way to learn a lesson Sarah!”  Yet the end gets pulled together quite nicely and again not the way I would have expected so overall I count them as nitpicks.

Recommend: Yes. It actually reminds me of the John Hughes movies. The only thing I would warn is that the characters do share the details of their murders so you should keep that in mind if that’s the kind of thing that upsets you.