Taylor Swift This is Our Song 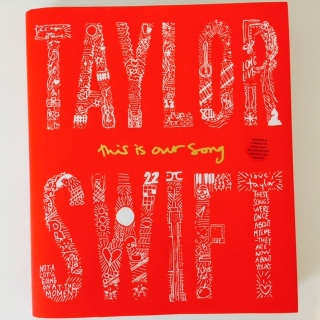 Taylor Swift: This is our Song

I bought this book because I like Taylor. I like pictures and to be honest, I was looking for something decorative and with a pop of color. This book is very red (appropriately) I just need a better camera 🙂

This is a fan book that was made as a tribute for Taylor Swift. Divided into three parts from the early years to 1989 (the album not the year) and collects photographs, interviews, reviews of the albums, other writings and pop culture like musings from the times. It also has crossword puzzles, fan art and little snippets from fans about what she’s meant to them. 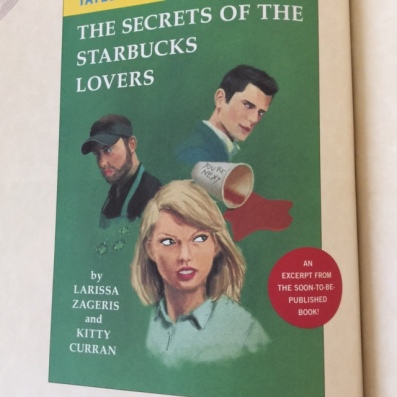 There’s a couple of pages of The Secrets of the Starbucks Lovers which is actually an ebook where Taylor Swift plays girl detective. It was cute. It’s potentially a nice little tribute to Nancy Drew stories and the art was great. I don’t know if I’d ever read the whole thing but again it was an entertaining interlude in this book!

Being a fan I’ve read a lot of the interviewers and the reviews before but it was interesting to see them all compiled in one place whereas normally you’d be reading them over a period of years. Even people who like her there’s a snarky aspect to the writing and the reviews that never really go away. Not since the beginning. Like by 1989 it’s, “Well, we have to admit she’s important to music these days…”

Also celebrity interviews when read like this are kind of amazingly empty. No fault to Taylor. I’ve always appreciated the fact that she’s a damn fine business woman and protects her image. The Kanye West incident and the performance with Stevie Nicks at the Grammy’s come up in 90% of the interviews. I lost track of how many times in admitting her writing and lyrics talents people specifically went for that, ‘fell in love with a careless man’s careful daughter line.’

One thing I did pick up on was she was a lot more flagrant about the revenge lyrics when she was younger. Better Than Revenge has probably always been the hardest Taylor song to stomach. It’s nice to see in some of the later interviews, at least, she becomes more measured.

Favorite Taylor Songs: Long Live, All Too Well and Everything Has Changed!