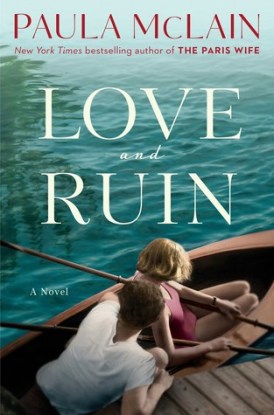 *I received a copy from Netgalley in exchange for an honest review.

Love and Ruin is the story of Ernest Hemingway and Martha Gelhorn’s tumultuous meeting, romance and eventual marriage. Paula McLain wrote Circling the Sun which was one of my favorite books a few years ago and remains so. Whereas I definitely have more mixed feelings about this book but mainly I preferred the ruin part.

Martha Gelhorn was a legendary reporter that I knew very little about going into this. Reading about her was quiet interesting. I have to admire her ambition and her courage I think anyone would. And it’s yet another book I’ve read this year about a writer! (Two in this case.)

That writing thread is super interesting throughout. Hemingway is beating out the pages of For Whom the Bells Toll during Love and Ruin and Gelhorn doesn’t have things nearly that easy with her books. There’s mutually beneficial help that turns into distrust and jealousy that then turns into outright sabotage in terms of their careers.

I could never really get into the beginning of this relationship. A lot of it felt like people simply chasing adventure because looking back on it- that’s probably what it was. Plus listening to Martha wander around their place in Cuba and wonder when he was going to leave his wife- well, that kind of set my teeth on edge. Don’t get me wrong- Martha is actually a likable character. It was just that bit that bugged me personally.

Ernest Hemingway. He’s a tough one. We get a couple of chapters from his POV. He’s already a legend and a larger than life character by the time Martha meets him. She’s naturally attracted to that, like a lot of people were, but it makes a lot of the war stuff- especially in Spain feel like a show. Maybe it was to him? Maybe it was just all notes for the next book?

I was never a Hemingway fan and while at times I feel sorry for him this book doesn’t do anything to help. Only toward the end when the knives are out does it feel like his true colors are shining through and I think that’s when you finally really get to see the extent of Martha’s grit and character at last.

That’s what this book comes down to in the end. It’s well-written and the descriptions of Cuba and Spain- and we do get a little bit of World War II are well-done but it’s really about two very strong personalities and the time they spent together. The most interesting part of the book was, to me, they never felt truly alive until they were falling apart.

Recommend: Overall yes. But especially if your interested in either of the main characters or enjoy books about writers/people creating things.