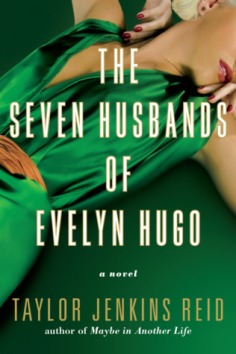 The Seven Husbands of Evelyn Hugo

So I had heard nothing but good things about this book. Recently one reviewer I follow said it was one of her all time favorites so I finally, finally decided to just sit and read it and I’m so glad I did. This one lived up to the hype and it’s definitely one of my top reads of the year.

Monique is a young writer whose trying to catch a break when out of blue legendary screen star Evelyn Hugo requests her to write a much desired interview. When she actually meets Evelyn however the star tells her that this isn’t about a lowly magazine interview. She wants Monique to write her biography and she’s going to tell her everything.

I think one of the reasons I put off reading this was because I was sure I knew the connection between the two.

So much more interesting than I thought it was going to be,

Evelyn Hugo is a great character. She’s far from perfect- she’s hurt people in the rise to the top and in some cases compromised in ways a lot of people wouldn’t. But she knows this and she owns it. Her strength and presence come through the writing almost as though this is a real star we’re talking about.

Her story is one of depth and love including a deep and abiding long-term friendship with Harry Cameron- that I actually found incredibly moving in some parts. It’s a story to about the people who move into and out of and back and forth through a life some time. Throughout this book there is great all around representation as well.

If I was to nitpick I would say that I didn’t care about Monique anywhere near as much as Evelyn- until the end. I was thinking that she just couldn’t live up to Evelyn- but hey, that works in and of itself. Like a true movie star Evelyn Hugo sucked up all my attention in the book.

Recommend: Yes. If you haven’t read it already I’d definitely pick it up. It’s a quick and engrossing read great for summer!

16 thoughts on “Worth the Hype: The Seven Husbands of Evelyn Hugo”