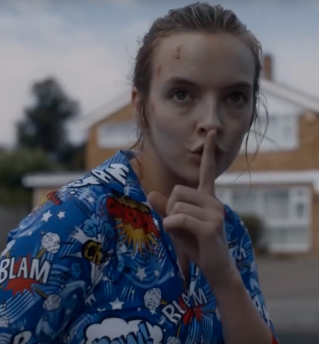 Villanelle, Queen of Chaos and Death returns for season 2 of the BBC Drama. She’s once again engaged in a cat and mouse of sorts with Eve Polastri, Queen of Piss Poor Decision Making being overseen by the still questionable MI6 Boss Carolyn Queen of It Really Helps Not to Care If Any of You Live or Die.

Season 2 was not as good from a writing stand point as season one and that could be because Phoebe Waller-Bridge is gone. It felt unwieldily at times and needed to be trimmed. There were a couple of big stories in the beginning that fizzled out and went nowhere.

Yet in terms of performances and character interaction it’s still more than worth a watch. This season Eve (who seemingly learns no lessons ever) is convinced she can control the over-the-top assassin Villanelle who likes nothing better than to put on a show.

I give Sandra Oh vast amounts of credit but I have never liked Eve and she doesn’t get better this season. Generally she treats people like crap while chasing her own obsession with Villanelle. I much appreciated Kenny reminding her this chick killed Bill once upon a time. Yet at another point Eve leaves a colleague to likely bleed to death cause a highly trained assassin who can more than take care of herself might be in trouble.

It does have the strange effect of making Jodie Comer’s Villanelle more likable. You understand her at least. She makes sense and the worse she gets you can’t really be surprised but have to wonder why on Earth Eve thinks she can control her.

Comer especially has a great scene at an AA meeting (long story) where she talks about the boredom of every day life making her want to scream. You get the impression she’s being completely honest here yet later when she’s asked she throws it back and leaves you to wonder if there’s any “real” her amidst the noise in her head.

But Jodie Comer really does steal the show.

Fiona Shaw is excellent as Eve’s calculating boss Carolyn who is at best coldly interpersonal and I’m not entirely sure she’s not at least playing both sides. I think her interplay with Eve is fascinating because it shows you how naive and selfish in some regards Eve is really being. She can’t even get a good read on Carolyn yet thinks she can control Villanelle.

I was also not big on the events at the very end and with the winding story problems I kind of feel like the best bet would be for season three to be announced as the last. There’s not many ways this can go so lock it down with a tight final season scripting and let it go.

Favorite Bits: Villanelle taking care of an asshole bully who thinks he’s getting the better of her and showing up for an assassination in a full on black gown and veil.

Recommend: Yes. The problems with the script and story were overall small but worrisome. I’d still watch the show for the acting and the three leads especially.