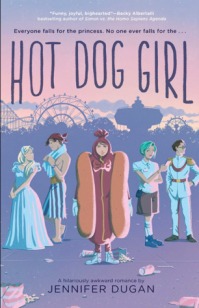 A couple of weeks ago when I did my summer reading recommendations I noted I was reading and enjoying Hot Dog Girl- which boy I should have just kept my mouth shut.

I should probably know better than to judge solely on tag lines and covers especially concerning hot dogs one of my true food enemies but boy it all came down to how much Eloise sucked and since she was the main character that turned into a problem.

Eloise’s best summer ever is not off to a good start when she finds out the small town amusement part she works at is closing after this summer. Her best friend Seely is still trying to get over a rough break up but all Eloise cares about is what she wants and that happens to be Nick and keeping the park open and boy no one better get in her way.

First she pretty much badgers poor Seely into pretending to be in a relationship with her so they can double date and she can steal Nick from Jessa. Cause sabotage and cheating is a super good way to start a relationship! Seely clearly doesn’t want to but Eloise is really good (awful) at the guilt because this is neither friendship nor relationship goals here.

The point of no return for Eloise and me though was when she happily stole her bosses business and personal files out of her dad’s desk (he’s the park accountant) and then desiminates them to her co-workers at the park in order to get them to participate in a keep the park open fundraiser with her despite the fact it’s clearly not what the owner wants.

Any attempt at getting through to Eloise seems to turn into not actual learning on her part but why is everyone mad at me? Everyone always hates me! Whining.

Yeah if not for fairly fast and engaging narration on the audio book and hoping someone would bin the stupid hot dog girl I might have given up on this one. It’s just that she was so immature (despite the fact she was a month from 18 as she told her dad) that I couldn’t help see her as like an eleven or twelve year old throwing a fit.

So when the super goopy relationships messes really start all I could think was no one should be forced to be in a relationship with this girl. She’s got like a decade before she should even attempt one!

The side characters in this were pretty good. But boy they all need to find a new friend or something. I wonder if they’re counting down the days until Eloise goes to college?

Recommend: No. It’s not the worst book in the world by any stretch but Eloise makes it hard to enjoy and there are a multitude of books that do it better.