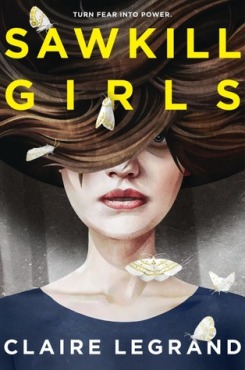 I’ve been on a scare me kick recently and want things along the lines of Stranger Things plus I’ve wanted to read a Claire Legrand for ages (or at least since last year) so I finally picked up Sawkill Girls.

Monsters and girl power. What more could a girl want?

After a family tragedy Marion, her mother and sister move to Sawkill Rock. They should have researched that one a bit more because girls are disappearing on Sawkill never to be seen again and there’s not a whole lot of caring going on.

Marion quickly has a run in with a horse. Meets Zoey- an outsider whose been there slightly longer but long enough that her best friend is the latest missing girl and Viv. The super rich heiress to a horse empire and we find out quickly a family curse in which she must obey and feed the demon.

In terms of atmosphere and general story it provided what I wanted and then some. It was actually far darker, creepier and weirder than I thought it would be so points for that and I did like the characters though in a big way trapped Viv is definitely the most interesting of the three.

But Sawkill Girls also left me split on a lot. The whole girl power thing is a nice vibe but we get this cult full of men who show up to fight the monster and honestly they’re presented as nearly as bad (and in some ways I think Legrand wanted to present them as worse) I’m all for fed up girls kicking ass and telling people what they think but at times it didn’t feel so much part of the story as making a larger point.

Which is fine in and of itself- it just took me out of the story.

Girl power was well quite literally power and while I liked the idea of that and where the powers came from I do feel like it took a bit away from the idea of ordinary girls fighting to live and actually separates our characters out as well. Because they aren’t normal girls they’re special. Hell it’s even talked about creating a school.

But she lead your sister to her death Marion! She stood there and watched the monster eat her alive (we actually get Viv’s thoughts on this Charlotte was screaming for help and begging for her life) all that was left was a hand clutching the necklace that you two shared.

Forgiveness is one thing (and Marion is practically made into a Saint in the story) but love? Fucking love? I know she’s hot and sad and all but come on!

I’m split on Sawkill Girls- there’s a lot to recommend it but also a lot that annoyed me. Apparently I’m going to have to watch out for this “people finding love with their sibling killers,” thing that keeps popping up because that just does not work for me.

I remain torn on this one but I’ll read Legrand again for sure! And not just because I still have Furyborn sitting on my shelf 🙂

11 thoughts on “I Have Some Reservations on this One (Spoilers)”