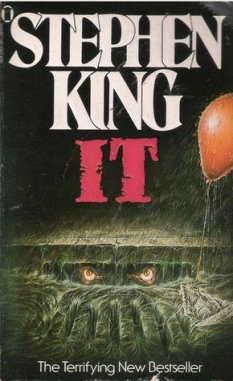 As a kid I was always a fan of Stephen King’s older stuff. The Stand, Tommyknockers, Carrie, Christine but for some reason I got it in my head that I would never, ever touch It. Yet the most recent adaptation and a rekindled interest in horror made me finally pickup the book tale of Pennywise.

And in the end I found it odd as promised and more sad and melancholy than actually scary.

So most people probably know the basics of the tale. A seemingly immortal clown terrorizes the small town of Derry, Maine every 27 years kidnapping and killing kids. At the start of one cycle he kills young Georgie Denborough who just wanted to play with his boat and was apparently never told not to talk to clowns in sewers.

The following summer George’s older brother and six-other kids will come together to form the Losers club and face Pennywise the clown. 27-years after that confrontation the children have grown-up and mostly moved away and forgotten the whole thing when a new cycle starts and Pennywise decides to call them home and take care of its unfinished business.

Do they have the courage to face their fears again? Will the memory of how they survived the first time help them or even come back? Can they find the imagination and faith they had as children to give them strength?

The first part of this book and the history of Derry- told in interludes- is interesting and genuinely scary. There’s something about King at this point where he can basically word vomit but still make it fascinating and immersive. I loved the kids just as much in the book as the film and I was surprised by how much more Pennywise was able to use their fears and shift and not just be the clown.

It’s actually got a lot in common with Tommyknockers- which in canon happened in the town next door. Derry is also mentioned a handful of times in that book. I do hope we get the full blown ending in the movie. Speaking of the film there were a couple of differences that really stood out to me including one that I was truly surprised about especially since I think their going to do the same thing to get them into the sewers in part 2.  But that’s for another post.

To be fair I knew some parts of the ending of It. I knew it was odd. Weird. Off-the-rails. There are stories King wrote it at the height of his drug addiction and I can certainly see that easily enough. On the one hand the more trippy elements of the ending of It didn’t bother me but it definitely took away from any of the fear.

The kid sex scene with all of them must be mentioned as well as its another big reason I always told myself I wouldn’t read it. I am not for censorship of any sort but I am for editing. Luckily I was warned it was in there and you know when it’s kicking off. It’s easily skipped. (Which only reinforces my belief it’s worthless and easily edited.) It’s also King so there’s random mentions of breasts and erections throughout.

There’s also racist and sexist language casually used throughout and even saying oh it was the olden days I did feel like it was a little much there. There’s also spousal abuse, child abuse, suicide and (I would think this goes without saying) extreme acts of violence most against and some carried out by children.

The bullies were actually toned down in the movie believe it or not- two of them were just outright psychotic in the book.

And a fucking giant spider which nailed my great fear.

So It is a very, very mixed bag but despite that I do come down on the side of liking It and being happy I read It.

Would I recommend It?

It’s one of those where you know your own limits. I think if you are like me and have some familiarity and liking for King’s writing of the 80’s time period and have been dancing around the idea of reading It- go for it.

But likely if this book is in your “not a chance, never” list nothing I could say about it would probably change your opinion 🙂