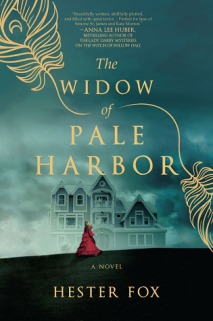 The Widow of Pale Harbor

When I read the synopsis of The Widow of Pale Harbor about a man with a secret past, a woman living in a big old mansion scorned by the town for fear she’s a witch and a series of escalating crimes based on the writings of Edgar Allen Poe I was like sign me up!

More than anything else I would classify this book as a romance and… do not sign me up.

We immediately find out Gabe is not who he says he is. Mainly there to open and preach a transcendentalist church. The small and isolated town of Pale Harbor is happy for some new blood though and Gabe is immediately attracted to Sophy. A woman whose basically been living as a hermit in her big old mansion with only a female servant/friend for company.

The town is sure Sophy is responsible for the death of her rich husband. Meanwhile you have these crimes that start out with just random dolls of fake hung cats but are quickly escalating into murder.

The town thinks it’s the witch. Gabe thinks that his poor beautiful tragic Sophy is the target.

On the good side the writing is really beautiful in terms of creating atmosphere. I’d visit Pale Harbor. Points for Sophy carrying on her husbands business as publisher even if it’s from a distance. The idea of using the Poe stories is a good one. I wish they had actually concentrated more on that because man once the love story starts…

I enjoyed nothing about that part of the story. I’m not a fan of characters (or people) who get so wrapped up in a relationship that they can no longer see anything but the other person and on top of that this hits one of my most annoying romance pet peeves. Everyone before the new love sucked.

They do a real number on Gabe’s dead wife just too make Sophy even more of an angel I suppose. And her friendship with Helen- while not without problems is pretty much toast once the man comes into play which is a shame that those things couldn’t be more balanced. It would have made Gabe and Sophy’s relationship more likable.

As to the mystery I knew pretty much immediately who was behind it just not the reason why so I guess I’m 50-50 on that. I wish more time and effort had been put into that side of the story.

So while The Widow of Pale Harbor had its good points it was a miss for me. But if romance is your thing and you go into it expecting that and not something else you may like it!

I received a copy of the book from the publisher through Netgalley in exchange for an honest opinion. The book is available now for purchase.