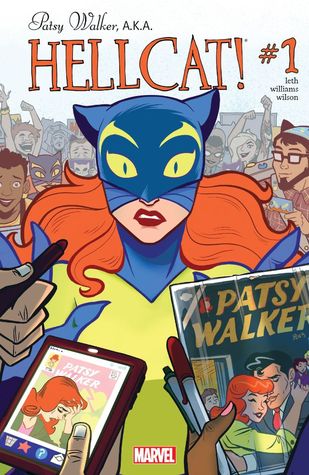 I really love the adventures of Kamala Khan (I love the character) in this one she’s looking for missing kids in Jersey City and fighting this crazy inventor and still trying to keep her life together.

While learning important things about her powers.

And getting an adorable puppy!

And fan-girling over a certain super powered cameo (that would so be me with Fassbender’s Magneto)… My biggest and only real problem with this volume was that I felt like the message was being slammed over my head especially toward the end. It’s a good message grant you but at a certain point I was like, “I get it! I get it!”

No way I’m not going to keep going with this story but I hope in the future they scale it back a little bit.

As for Patsy Walker (Hellcat), one issue is definitely not enough to judge. I enjoyed it overall. It’s another one I’ll keep reading but I do have to say one of the reasons I picked it up was the Jessica Jones character whom I absolutely adored. This is not that character and I think the expectations were playing with my mind a little bit.

In an of itself she’s also a little childish. There was one particular part where she was having a fit and I thought the art seriously made her look like a twelve-year old child. I’m still not sure if that was on purpose or my mind paying tricks on me. I worry that the fits and temper are going to get on my nerves eventually but hopefully not.

However, it was pretty funny and her idea for a super-power employment agency definitely has the potential for more funny.

Recommend: Yes.  I have to say I’m enjoying reading the adventures of the women of Marvel and watching them on television so much that I have no idea why they can’t translate to the cinema.