What is their purpose?

Dr. Louise Banks (Amy Adams) is a world renowned linguist whose called upon to help when twelve alien ships land around the world and make contact. Jeremy Renner plays another scientist who does have a very important part in the movie. Forest Whitaker is the Colonel and pretty much the go-between with the government.

Can they actual learn the alien language before the world goes over the deep end? If they do are we going to like what they have to say? Or is everything going to end because of one colossal misunderstanding?

And will I make it to the end of the movie before my bladder bursts? Okay, that’s just me. I hate having to go to the bathroom in movies. You can’t pause it so you absolutely miss something and I had read reviews that said don’t miss a moment of this (there’s a couple of moments you could probably miss and be fine). I know, I know, that’s just me but the ending definitely felt a little too long. Arrival is a gorgeous film.

This scene of the fog rolling the first time Louise sees the ship really needs to be seen to be appreciated. I really loved the design of the ships and the aliens. They had a very interesting look where you can see how they would be intimidating and scary by nature but it wasn’t one of those alien movie things where you see them for the first time and you’re like oh, yeah they’re going to kill us all! 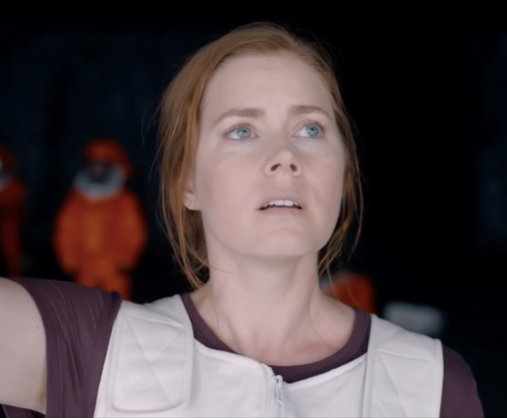 The performances are really good as well. I’m not the biggest Renner fan and he’ll always be Hawkeye but he worked here. Good chemistry with Amy Adams. I did however start picking up the clues for the twist about halfway through. I got the mechanics wrong but otherwise…

I also really liked the alien “weapon.” I don’t want to give too much away but Arrival really is a movie where you spend a lot of time thinking about it after not just the mechanics but the questions brought up. I still don’t know if I’d want the knowledge that’s imparted. I went to see this with my brother whose normally a fan of the more action orientated movies but he also enjoyed this one a great deal.