“Believing in yourself is your magic.”

I really haven’t had much luck or interest in many tv series this year. But I found Little Witch Academy and just speed through the whole thing in like a week and a half. Which is really good for me. I found it on Netflix. It’s the story of a young girl called Akko, who goes off to a witch academy but she’s not that great at being a witch.

Akko is one of those characters that are likable and easy to root for while at times being really annoying and someone you could just, occasionally, strangle. But she’s bright, confident, hopeful, generally likes people (even when they aren’t that nice to her), friendly and really believes in doing good. She also holds out hope of one day finding out what happened to her childhood hero Shiny Chariot, despite the fact that many of the students mock her love for said hero.

Akko is also stubborn, bulldozing and full of bad ideas that she kind of browbeats her friends into doing a lot of things they don’t want to do. 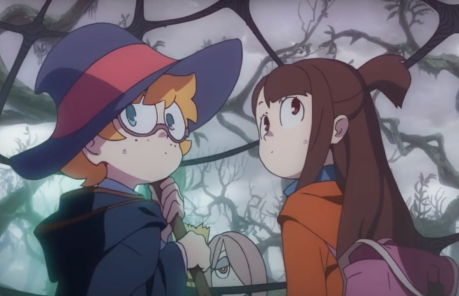 It does take a little while for Akko’s purpose/journey to really get going but when it did it was kind of a little too speedy. And you’re gonna know what’s going on with Shiny Chariot right from the beginning but I was impressed they brought some depth there I wasn’t expecting.

I liked how Akko held onto her childhood idol even though people made fun of her for it and tried to bring her down. Though I admit sometimes it was a little hard to pick up on Akko’s age. I felt like everyone else was supposed to be teenagers at least, late teens in some cases. But Akko often came off as a lot younger.

The animation was mostly lovely. There were a couple of weird times when I almost felt like it paused or was stuck but I haven’t watched anything like this in awhile so it could just be me being unfamiliar with it.

Bonus points that all of the students were really likable. They didn’t try to Draco anybody. Well, maybe they did in the beginning but they got over it and she wound up one of my favorite characters.

Even when they were annoyed with Akko or something she was doing they all managed to come together and put a larger good first at those times. Also very little romance! There’s a couple of male characters at a boys school off and on throughout the story and you definitely get the impression, on his part, one of them grows to like Akko but it’s very much background.

I really enjoyed Little Witch Academy. I think it’s also a good series for kids maybe something for over Winter break.