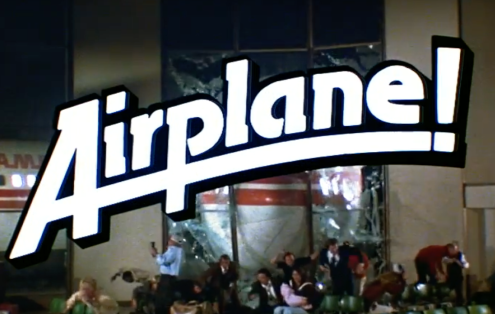 Airplane! was my Blind Spot pick for July and first of all I want to say that humor is different for everyone. Plus I really did try to think of this movie (like all of them) in the context of its time period (1980)… but at this point I don’t believe I can entirely do that. I also tried to honestly consider if I would have liked this movie better ten years ago.

Airplane! is about a traumatized war pilot (Robert Hays) who hops on a plane in order to get back his girlfriend Elaine (Julie Hagerty.) Severe food poisoning derails the entire crew and things go downhill from there in more ways than one.

Humor and provocation have been in the news a lot recently since the whole James Gunn tweets thing broke a couple of days ago. Which struck me because there’s also some pedophilia jokes in this movie and I can honestly say I didn’t find that funny.

Was Airplane! trying to be provocative in its humor or just silly? Is there a difference? Actually as I was reading on-line today Airplane! actually comes up in this Deadline article on Gunn and the whole Rub & Tug mess- literally asking if something like Airplane! would have been made today.

It would help if I actually find the work funny. I did watch previews for this even before I put it on my list and there were a couple of good lines here and there. Leslie Nielsen and the whole cast really was game but I don’t think I laughed once and as a matter of fact I cringed hard in several places.

It struck me as racist at least with the jive talkers. And yeah, at this point, random close up boob shoots for no reason other than boobs- eye rolls.

Truth be told I considered turning it off several times but since it’s only an hour and a half told myself power through, power through. I am trying to be fair. No doubt I have a lot of movies from the 80’s and 90’s that I watched with family or friends and loved that today people would consider problematic.

But in the end I am watching it now. Bonus points for an awesome cast but I just didn’t like it. I thought it was too much cringe and no laughs which is unfortunate.

4 thoughts on “Please Pass the Parachute”