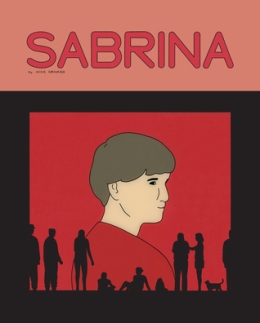 I leapt at reading Sabrina when I saw it was the first graphic novel ever on the Man Booker Award list. I love graphic novels and the subject matter- about a missing woman and the effects the media and social media have on the family and the story- well, it’s something that very much has interested me lately.

I’m really torn on Sabrina. Basically I wanted to like it more than I did. But by the end I was like, “Hm, I really hope the other ones don’t fall as flat.”

Sabrina doesn’t deal much with the crime or the character. It deals a bit with her boyfriend and her sister and mother but the main character is a childhood friend of the boyfriends who doesn’t even know her but takes him in to try and help. It is an interesting choice with some pretty brutal emotional stuff going on with the poor boyfriend interspersed between what job this guys going to take.

Life goes on even during the worse times.

Sabrina is barely a part of this story on the one hand it makes it easier for the media to manipulate and dehumanize her. Fair enough. But on the other hand I couldn’t help feel like yet another story about a female crime victim in which they aren’t important and in fact is mostly told through the eyes of a male who didn’t know her. Even her sister and mother are only bookends.

I also didn’t like the art in this one. All the characters look the same. Seriously, I couldn’t even tell the Sabrina apart from her sister and mother.  And no real facial expressions. It kind of reminded me of clips I’ve seen of King of the Hill so it didn’t appeal to me on that level. I admit I like my graphic novel art to be big, bold and bright.

(Also a personal aside there is some seriously poor animal parenting in here that made me intensely dislike a character.)

Yet I admit when it hit- it hit hard. The randomness of the crimes. When the Internet nutcases and conspiracy theorists took over those pages where maddening. It’s definitely bringing in Alex Jones and those people doing the same thing to Sabrina’s friends and family they do to people like the Sandy Hook parents saying it’s all the government, the victims never existed, produce death certificates and actually sending harassment and death threats.

It just made me so upset and so angry! And did make me think about a lot of issues. So good work on that at least Sabrina.

Recommend: Overall no. Unless you’re already interested in the subject matter.

If the subject matter does interest you also check out Dead Girls by Alice Bolin- a book of essays (that also talk a lot about LA & Joan Didion not a bad thing) there’s some really interesting writing about the whole dead girls in our cultural story-telling and also some really striking things on making cult heroes out of so many bad guys both imagined and very real. And why we do both of those things.