Generally speaking I think you know someones a keeper when they jump into the ocean and fight a giant prehistoric thought to be extinct shark monster to save you. Which did kind of make me laugh in the movie because dude you just meet this chick!

The Meg is the big summer shark blockbuster this year and I’ll be honest I was really excited to see this and I wanted nothing more of it than to be fun and well, sharky. Jason Statham stars as an expert diver whose called into help when a team of scientists and the billionaire backing them accidentally make contact.

The film was pretty in places and I thought it was well directed had a couple of nice jump moments and the cast was all fine to good. Though it also suffered from some corny lines and delivery.

The Meg actually starts as a rescue and we spend a pretty good amount of time setting that up and characters before sharky McShark comes bursting into the picture. Which on the one hand was a good thing on the other hand…

Impressively enough the kid (Shuya Sophia Cai) was a bright spot. I did not want the shark to kill her. Though can we talk about that impressive display of shitty parenting when they took her with them to hunt down the shark? I mean yes the science vessel was going to be abandoned but it was safe and there was at least one adult in the group that wanted to stay. 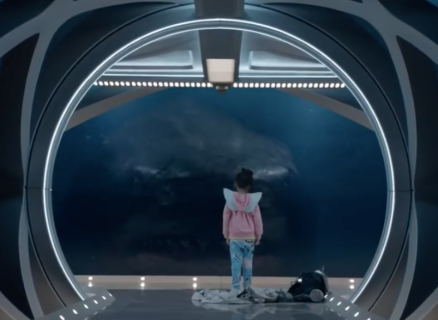 I also have to wonder about that little dog Pippin. I have two German Shepherd labs who are to chicken to get near the pool and start crying the minute they see the groomer. This little guy in his pink bow takes a flying leap into the ocean to go for a swim? With the shark relatively close. Not much sense of danger there buddy.

Jason Statham and Li Bingbing were good in their roles but they had zero chemistry and that whole thing basically consisted of people telling them and us that they liked each other. They made it kind of cute cause Statham played it a bit as Jonas being awkward but then you know, attempting to rescue her from shark.

There was a scene with a whale that reminded me of that awful scene in Jurassic World but it was quicker and I knew it was coming from the minute they introduced her.

Also there was this really weird scene between Jax (Ruby Rose) and the Doctor where he tells her she’s a good person and it’s supposed to be sweet but all I could think was when did she (or anyone else) say that she wasn’t? Am I supposed to think that?

When we finally do get to the shark induced chaos its a lot of fun and surprisingly not gory.

Anyway once it got started The Meg was fun, diverting and ridiculous. Pretty much what I expected.

Recommend: 50/50. This is almost a mood movie to me. If you’re in the mood for it- you’d enjoy it. If not or you’re expecting some great Jaws remake you’re probably going to be highly disappointed.