What Would Harley Do? 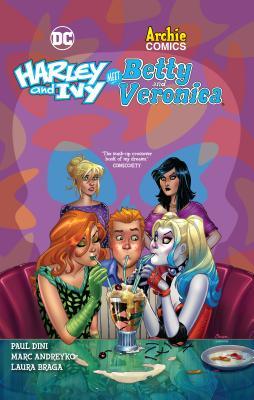 I actually have, at times, asked myself the same question Betty Cooper asks in this book… What would Harley Quinn do? I like to keep it legal though. 🙂 Still I was amused to see someone else asking the exact same thing!

This is a cute book. I’m a huge Harley/Ivy fan and while they are currently laying low from several different gangs they’ve pissed off they wind up in Riverdale. Hiram Lodge (Veronica’s dad) comes to Ivy’s attention when he wants to develop a protected piece of land and off they go!

Okay, I have to admit I haven’t read any of the Archie comics but Salem appeared! One of my favorite fictional cats: 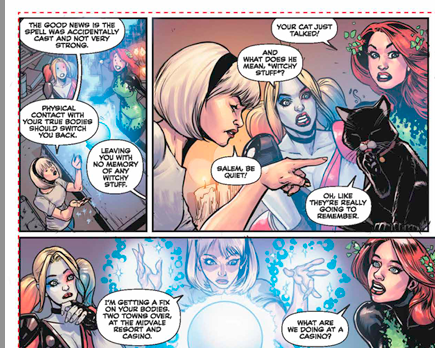 That was worth it alone.

And Catwoman is a Josie and the Pussycats fan!

Long story short Harley and Ivy swap bodies with Betty and Veronica and hijinx ensure. Betty Cooper is surprisingly good at being Harley Quinn which I thought was funny. I would actually have liked more of that and the out of place element than we got.

Overall it’s a fun comic. A fast read. I enjoyed the four main characters and spending time in Riverdale. (Although I must say according to Goodreads reviewers a lot of people feel that part was very off.) So this may be more for Harley/Ivy fans but I like the Archie characters regardless and I love Betty and Veronica.

(Mental note to self: Get back into Riverdale!)

Like I said though they went to fast through what was the fun body swap stuff into an over the top showdown with the bad guys. I was a bit confused by the “Joker” at first but apparently I missed a head injury and after being utterly useless for most of the comics I don’t think we needed the save by Archie and Jughead- the girls did just fine thank you very much.

Also Harley would: kick ass, help her friends no matter what, enjoy whatever life throws at her & always have a good time.

Recommend: Yes. But I’m a huge fan of Harley and Ivy and generally like Betty and Veronica. So keep that in mind. It’s got its issues but I wasn’t expecting anything more than fun and a couple of laughs and that’s what I got!