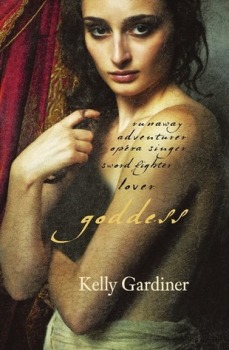 You have to admire Julie d’Aubigny- when the family of the woman she falls in love with ships her off to a convent Julie just goes and signs up as well. Then she commits arson (while using the body of a dead nun) and takes off with her girlfriend.

Admire the passion and the life. Maybe not duplicate certain things.

Considering she died at 33 she lived a lot of life in those years. She was sentenced to be burned at the stake at one point and then became the biggest star of the Paris Opera. She slept with men and women had two great romances with women. Was chased out of Paris after dueling with not one but 3 men (she was an expert fencer who always won.)

She was up. She was down. She lived the highs and survived the lows. And now she’s dying in a convent telling her life story  to a Priest.

And really the book cover just so easily casts the movie…

I was still split on this book as I enjoyed the life story parts. They read fast and its so cinematic. She’s a big over the top wild character but every other chapter is her telling her story and she’s almost a little too much there. On the one hand I admired her in the face of death on the other she’s super full of herself.

Her constant chatter about her fame and her status and everything else along with the implication the Priest had never heard of her (though she thinks he’s an ill educated idiot) made me wonder at times if I should be taking her seriously. I didn’t know if this was biography or unreliable narrator though I guess I come down on both sides.

Anyway maybe cut the Priest/ current day chapters down a bit and it comes out more even. Even with that little issue hers is definitely a story worth reading.