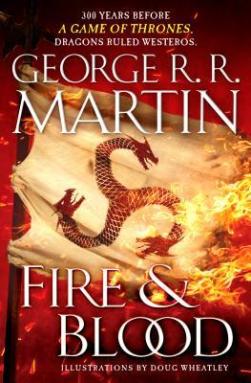 You got to love him. Only Martin could drop a 700 page history of the Targaryens (instead of the book we all want) and then only get to the halfway point of the history! And a vast amount of that is the previously published Dance of Dragons history. Er… I can’t even be angry because it’s Westeros. It’s dragons. I ate it up.

Fire & Blood is also very Martin in both good and bad ways.

I’ll start with the bad.

The Dance of Dragons stuff is interesting but like I said- I read it before and most people who would buy a book like this probably have as well. It’s also where it starts to get long with pages and pages of names being thrown at you and battle tactics and so on and so forth.

Plus quiet frankly it’s where most of the Targs and a whole lot of the realm start to come off as awful. The dragons are dying so thats not cool. And no one ever really recovers. I honestly wonder- just from a publishing view if that shouldn’t have been severely edited since this is a pretty dry history he could have said oh, for more in-depth information look at this account yada, yada.

But would that have pissed people off?

Also rape is mentioned mainly off page but it’s mentioned so much still! As are child brides and women dying in child birth. But I suppose Martin can’t exactly go back and put the genie in the bottle on those issues when they were still happening around the time of Game of Thrones.

(Aging everyone up in my opinion was a big benefit of the show.)

But on the good side there are a couple of instances of that being called into account. Mainly by female characters. One Princess threatens her stepfather for killing her mother with the constant breeding and a much loved Queen blames her husband for forcing their daughter to wed to young after she dies in child birth. So I’ll give points for that.

In fact for all the issues it’s the female characters in Fire and Blood that really stand out. I  especially loved Queen Alyssane who wrote laws, toured, went to the Wall, held women’s councils, got the law of First Night revoked, etc. Etc. I actually teared up a little when they started talking about what age had taken from her. Of course Rhaenyra fighting for her throne when they passed her over for her brother. But there are others sprinkled throughout like a Joanna Lannister fighting off the Ironborn for years in the West, Nettles the young girl who rides one of the wilder untamed dragons and disappears and a woman sailor lover of one of the Princesses who may be the way Dany wound up with those eggs.

That’s another fun bit. Tidbits here and there that you want to hear more about. There’s one awful death that involves Valyria gives Maesters nightmares and left me like, “Oh, I want to hear more about Valyria!” I also want to read about the Dornish. The Blackfyre Rebellion, finish Egg’s story, see more from across the seas and get the bloody She-Wolves of Winterfell already!

Maybe that’s the most impressive thing about A Song of Ice and Fire- it’s a fully functioning world full of so many stories that could be told so many characters great and small that could have their due that to an extent it’s even escaped the grasp of the author.

Recommend: Yes. But this is more of a die-hard fan kind of book.