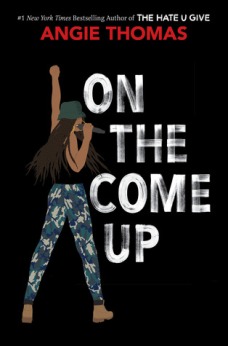 On the Come Up

On the Come Up about an aspiring rapper named Bri- her start, her friends and her family- is Angie Thomas’ follow-up to the enormously successful The Hate U Give. I read that book thought it was fantastic and deserved all the hype so I was very much interested in seeing if Thomas could pull it off again.

And she very much does.

Bri wants to rap following in the footsteps of her late father who lost his life to in a gang shooting. Her beloved Aunt Pooh is currently in the opposing gang and starts off as Bri’s manager. The book takes place in the same area as THUG and the police shooting in that book is alluded to.

Bri’s mother is a recovering drug addict who loses her job at the beginning which adds extra pressure to Bri’s desire to make it. She knows her family is hovering on a precipice despite how hard her mother and brother are both trying. There are also issues at her school when two guards manhandle and assault her over contraband. Not to mention one of her songs pissing off the gang members that took her father out.

So there is a lot going on in On the Come Up issues at both a big and personal levels. Not to mention the usual issues of just growing up. Bri’s a very relatable character in a lot of ways. She reminds me of characters from my other favorite contemporary writers (which Thomas is fast becoming one of Julie Murphy and Courtney Summers) where she’s far from perfect and she makes some pretty cringe mistakes but it always feels in character. She always feels like a real person capable of learning and growth. You may not always like her but you get her and I at least never lost the ability to root for her.

I’m also always impressed by her ability to make conversation and dialogue flow so well. In the beginning where the rap is more heavy and we actually see Bri perform in the ring and pull together songs there would be long swathes where I actually felt like I was listening to a performance (and not just when she was rapping.)

It’s kind of hard to explain but I felt like I was in the flow in a way. Makes sense because Angie Thomas used to be a rapper so she would have a great sense of dialogue and rhythm and such. Anyway I liked that quiet a bit.

And I also liked the points about Bri’s songs and what she’s singing and presenting to the world. Does she want/have to take responsible if people twist her words and don’t get her meaning? That idea of taking on the power of her words having meaning goes from the macro the micro-level as well when a situation blooms with her Aunt and the rival gang and did Bri in a fit of anger give her Aunt the okay to do something worse.

So while On the Come Up doesn’t have the emotional punch of THUG it’s still a thought-provoker with a lot of interesting things to say about relevant issues today. In fact if I was going to nitpick the novel I’d say there’s a lot of ideas going on and some feel a little lost in order to wrap it up. But life doesn’t wrap up neatly either.

But on the whole On the Come Up was an entertaining win and no sophomore slump for Angie Thomas. I’m looking forward to her next book!