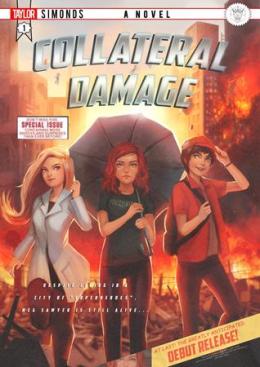 I really love the fact that superheroes are so ingrained in us at this point- it’s so much a part of our landscape that now our art is starting to reflect things like the psychology of superheroes and living with them for normal people.

Plus this is a fantastic book cover!

Collateral Damage stars every girl Meg whose life in the superhero infested Lunar City is pretty much a nightmare. She can’t even make it to work without getting her car smashed up buildings are destroyed like clock work and no civilian is safe from becoming collateral damage.

In fact Meg and her best friend Oliver are orphans to it in a city full of them.

Lunar City has a set up that the supers are chosen, given a serum for power, never known and switched out every couple of years so it doesn’t go to their heads. We pick up on Meg’s story when she discovers the body of one of those heroes (whom she accidentally knows) and realizes the collateral damage might extend further than anyone had ever thought.

So she teams up with a scientist who works for the program in order to find the other heroes and warn them before their time is up which is the very opposite of what Meg wanted to do in the first place which was the very reasonable get the hell out of the city.

But along the way they face unimaginable danger and realize some pretty unexpected truths.

It’s very over the top- but in a good fun purposeful way. Reading this I couldn’t help but think it should be a movie and probably an animated one at that. All the characters are likable and while there were a couple of very obvious things there were some nice surprises in here as well.

The big bad is also very over the top. But all in all Collateral Damage was a nice surprise, a fun read and would be perfect to pick up during the upcoming holiday/Winter season.