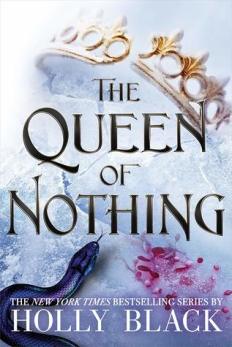 The Folk of Air Series

Holly Black has finished her tale and I have officially finished exactly 1 (1!) of the endlessly running book series I’m reading this year!

So I thought I’d wrap up my thoughts on this popular tale of the fae and confess that ever since I read the first book in my head Cardan has always been Tom Hiddleston’s Loki with a tail. Some things just burrow into your mind like songs and you can’t help yourself.

The Cruel Prince starts with Jude who along with her sisters was taken back to Elfhame to be raised by the cruel fairy who killed her mortal human parents. Jude wants very much to fit into this world but because she is mortal that’s a huge knock against her immediately.

Still she plots for power and tangles with the handsome cruel Prince Cardan and his friends.

I liked this book a lot especially it’s Game of Thrones style ending. So I was totally hooked.

I also enjoyed The Wicked King without giving too much away I just think Holly Black does the fae in the most fun way. Dark and delightful. I didn’t like this as much as the first book and worried about the ending when it also ended on a shocking betrayal and cliffhanger.

Thankfully I do believe Holly Black brought it in strong with…

We got a nice little fairy tale within the book. I even wound up enjoying a certain someone who probably never should have been trusted in the first two books.

For me personally I thought the epilogue was a bit much but that’s just a personal thing and I don’t know if Black is planning on revisiting the world but there are some ideas for what could be really amusing novellas even though like I said we do get a strong ending here.

So while I enjoyed each book on its own I can say in all totality the series is fun and addicting. I enjoyed the world and the characters as fairies go it’s definitely darker and more intriguing than something like A Court of Thorns and Roses.

I’m happy with it overall and I’ll definitely read more Holly Black in the future.