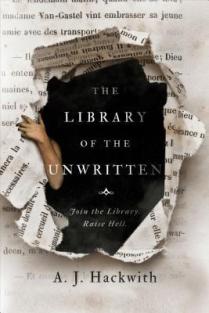 The Library of the Unwritten

I think it hurts a little more when a book that has all the makings of something you should love disappoints. If I did 5-Star Read predictions The Library of the Unwritten would have been on it.

It’s a magic library in hell for Pete’s sake!

And yet it wound up being only a 2- star it was okay read.

So I have to ask myself was it me? Was it the book? Like any seemingly good coupling that ought to be perfect for each other on paper did we just not meet at the right time?

Claire Hadley is Hell’s Librarian specifically that of the unwritten book section. So there’s another crisis of confidence for all those unfinished authors out there you’re consigning your work to hell in the end.

Also that work could potentially come to life as it does often times for Claire most recently in the form of a Hero who takes off to try to meet his still-living author. There’s also demons, damsels, Valhalla, angels both good and a little too high on the management power trip.

It’s an Indiana Jones like adventure in which several pages of a book that could spark a war between heaven and hell turn up and set both sides on the quest to find them and… it all just fell flat. And the book did have its moments (quote duel, Hero and Leto) so I think my biggest problem with it comes down to Claire.

She’s about 75% unlikable and in a rude and prickly way of treating people generally badly. To me not helped at all when you find out some of the reasons why. She does get better near the end but for some reason I could just never warm up to her. Even when we were supposed to feel bad for her I felt bad for everyone else.

Seriously and this isn’t a bad thing but Felicity Jones would be perfect to play her in a movie! Perfectly fine actress whom I can never warm up to either.

Ugh as much as book 1 was just okay- I’m not saying no to continuing on with the series for the side characters and the big dogs alone. I do hope we get to see more of heaven and hell in the future though. I’m just not rushing into the rest of the series.

Unwritten Library feels like the perfect cap to a confusing and slightly off reading month for me. It’s not a bad book more of a maybe we’re just not write for each other right now kind of book. It’s a bummer. But hey, it happens.