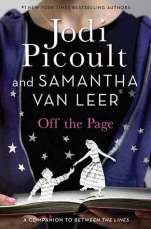 The best way to describe some books- they aren’t exactly bad but a chore to finish. Off the Page was that way to me. It was a chore to finish reading it. I think I only did because I don’t like giving up on books. Maybe the best thing I could say was that it wasn’t awful.

Delilah helped Oliver escape from a book in which he was Prince by substituting the (admittedly willing) son of the author. That all happened in the first book which I wondered for a moment if I should read and then I thought, “God, there’s a whole other book of this!” I don’t mind fairy tales and I like Jodi Picoult, although I admit I haven’t read her for years before this one, but this book just was irritating.

First- I didn’t really like any of the characters except the secondary fairy tale ones. Delilah talks about how she knows it’s going to be hard for Oliver to fit in and that she has to help him and then she’s pretty much always mad or irritated at him. She has a huge fit because he kisses her mortal enemy… except at the time they’re rehearsing for Romeo and Juliet so that just didn’t do it for me. I found her and Oliver to be incredibly selfish in many instances including not telling Edgar (who switched with Oliver) that his mother was sick right away.

Also I wasn’t sure I ever bought this true love thing. I mean you want to come out of the book to live a life of choices and opportunities and immediately vow everlasting love to the first girl you meet? Seems a little silly too me. Funnily enough I thought the fairy Princess they all made fun of for never having a thought in her head wound up with more depth than Delilah but that’s just me.

I also found it really annoying that in my Kindle edition the three points-of-view were distinguished not just by names on the chapter but by actually doing the whole chapter in different colors than the others. Ugh. Unnecessary and it pulled me out of the book.

Below is a small:

TRIGGER WARNING: There is a dog death. He gets hit by a car which is made even weirder by the fact that he does have some human characteristics including having been able to talk in the fairy tale. But don’t worry. Delilah does not let that mess things up for her at all.

Recommend: Not to bitch (to late right?) but no. This book was pretty run of the mill and didn’t do anything but annoy me. I have a better “fairy tale” book I’m finishing now.