A Tyranny of Petticoats 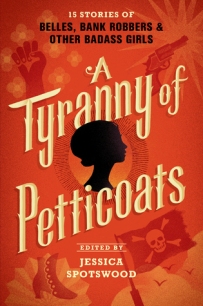 A Tyranny of Petticoats

You can pretty much find a story for anyone in this collection. The stories span about a three hundred year history of time and the authors include people like Marie Lu and Marissa Meyer amongst others. (I’ll admit sometimes I pick up anthologies and I’ve only heard of one of two of the authors or I’ve heard of them but never read anything by them so it was nice to have some very familiar among the new.)

The women in these stories are pirates, bank robbers, business women, radicals and others all of them just trying to survive and find their places in the worlds changing and shifting around them.

I don’t think there’s a story that I didn’t enjoy although some of my favorites included; The Red Raven Ball by Caroline Tung Richmond, The Legendary Garrett Girls by Y.S. Lee (both of which could be longer stories or movies!) and El Destinos by Leslye Walton. In fact  one of the downsides of a collection like this is I could have read quite a few of these as longer stories or books and been happy with them. Sometimes you want more!

The stories are more “based on” certain eras and women. In fact I was surprised by several of the stories having a hefty dose of myth and “magical realism.” That’s an expectations game however. On my part I was expecting something else of the book as a whole. Though it did seem a little odd to have stories about ghosts and the three sisters, who I think were supposed to be the fates, mixed in with super realistic stories like the protests at the 1968 Democratic convention.

Still, the writing was mostly excellent in all the stories. The characters were fun and left an impression in more cases than not and even better in many instances it left me wanting to know more about the time period the stories were set in.

Recommend: Yes.  Just keep in mind this is not going to be a straight historical read and that the two stories in the beginning are kind of downers but otherwise I look at it as a wild adventure through pieces of history with some memorable female characters!