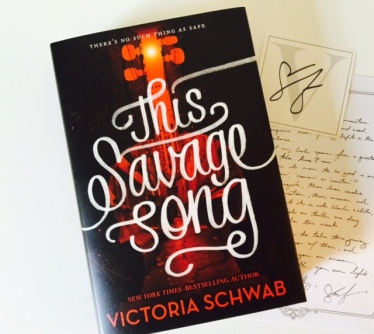 This was the Owlcrate book for July and probably my most anticipated read of the summer and overall I’m kind of torn on it.

Kate Harker and August Flynn live in a world where violence breeds actual monsters. Kate is desperately trying to prove herself to her father, which in her case means being as big of a monster as him. August is technically a monster who doesn’t want to be. When the two are thrown together under heightened circumstances they learn things about themselves and each other and generally begin to realize that the definitions of monster and human may not be a simple as they thought.

I was really intrigued by the monsters and the idea of them in this book. That literal violence gave birth to some of the monsters- even gives birth to them in different ways. The idea that August and his siblings may be necessary beings. The tie in of places and memories taking on such meaning in a world like this… All of it was very interesting and has a lot of potential.

I also liked Kate. She’s smart even though her past leaves her very troubled. She’s not the nicest or the easiest character to deal with- she’s human. She picks up on somethings quickly and others not so much. Compared to Kate I thought August was one of those characters you see a lot. Forget the monster label. He basically a kid with special powers who spends a lot of the book not understanding them and not wanting to use them. Though in his case it’s understandable. I just felt more for Kate.

There’s good interaction on their part but at the same time I didn’t feel like the story held any real surprises. Maybe it’s a good thing or a bad thing depending. But I just felt like I knew exactly where the breaking of the truce was going, who was involved with it for real, what had really happened to Kate’s mother and so on and so forth.

Even with the set-up for the next book I was like, “Okay, interesting. But not really surprising…”

I’m giving this a B because it’s basic premise was intriguing (I loved the idea of the monsters being born), Kate’s a (mostly) interesting character and it’s a quick fun read with a lot of potential. I think I could really love this series but I hope the next books isn’t so predictable story wise.

Recommend: Yes. Especially if you like Victoria Schwab’s writing. Though this is probably one you could wait for the whole series to be complete.