For once the hype didn’t let me down. I must say I hadn’t even heard of this until a week and a half ago when some of the people I follow started talking about it. I heard “like E.T. and Super 8,” and I knew I had to watch it. I also did something I rarely get to do anymore and I was completely spoiler free.

The show is set in 1983 and centers around the disappearance of Dungeons and Dragons enthusiast Will Byers and the appearance in the woods of a strange girl called Eleven. The show is only eight episodes and it just sucked me in. 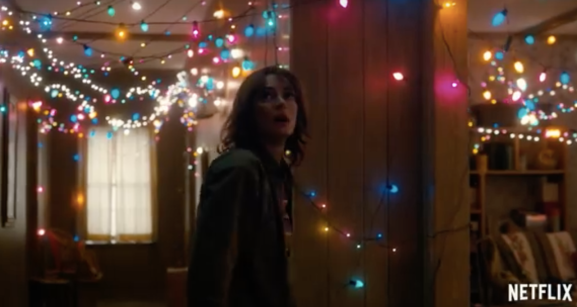 I’m not going to give much detail on the story because everyone should watch it without spoilers but I loved, loved the look of the show. Not just the beautiful shots like of the Christmas lights or at the quarry but just the clothes, the fashion, the cars and houses. Even the phones. There were a couple of times when I thought, “How weird is it to not have a cellphone? To just hope that someone comes and finds you or saves  you…” and then I remembered that I was born around this time period. Once upon a time I could live without my phone to.

And Nancy’s outfits? I thought she looked adorable.

I also loved the music. The score of the show as well as the songs used.

The performances were all on-point. I know some people had problems with Winona Ryder but honestly she didn’t bother me a bit. I thought Joyce was probably a tough role and she did a great job.

But the kids! Across the board it was the kids that really bring heart to this one and every single one of them including the three teenage performers were excellent. Millie Bobby Brown as Eleven and Gaten Matarazzo as Dustin especially stand out…

But Finn Wolfhard and Caleb McLaughlin were also great. I felt like I was watching kids who were best friends and had known each other for years. I love the “friends don’t lie,” and the fact that they could fight and joke about Lando and still always try to help each other first and foremost. This was a show I watched where I actually actively wanted all the characters to survive and succeed and be safe and proven right.

Needless to say I really enjoyed this one. It was such a nice surprise of great characters, performances and a good story. I’m not even entirely upset about some things left unresolved because I will definitely be watching a season two.