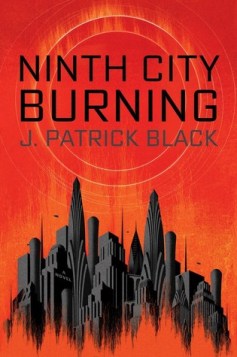 Five-hundred years after a hostile alien invasion nearly wiped us out our one chance to repel the next attack is to harness and use the power that was unleashed when they arrived. Plus a whole lot of other things going on in a book that includes aliens, magic, inter-dimensional time-travel and a ton of world-building.

This book is an interesting one because I was kind of all over the place with my feelings for it. First of all there’s like seven points-of-view and for me I think at least two of them were not needed. It felt a bit like this season of The Walking Dead every time I was with a character I enjoy and it seemed to be moving- back to someone else for an episode! Only Ninth City Burning did actually move the story along better.

I was also very confused at the beginning as to what was going on. You have one tract with the cities who seem to be engaging in a war, another with outer districts that reminded me of the Hunger Games and then a third with people who are just wandering the Earth and no one really seems to know what’s going on. But the stories do connect! They do. It definitely flowed better when everything started linking up.

A particularly strong point in Ninth City Burning for me was Rae, Kizabel and Naomi’s narration. Three really strong female characters who are intregal to the war effort in different ways. Rae and Naomi are sisters and I actually loved their relationship especially the choices that Rae is faced with and how she comes to terms with Naomi’s future and what she’s willing to put up with to stay close to her sister. I also appreciated the friendships. The story was chockfull of world-building and POV’s but those three really stand out.

And there is a lot of world-building. A lot of how this works and that works (I don’t want to give anything away.) I’m not going to lie. At times it felt like a little too much. Even the battle felt like it went on too long. But it also merges together very nicely. There’s science, magic, fantasy like things. I found it interesting how they seemed to be implying the magical elements where powered.

Overall, I had some issues with it, but I think the series has a whole lot of potential to be great. Yep. It’s another series. One thing I will say about Ninth City Burning as well that was another plus for me is even though this is a series the ending of this one could work as a one-off. Although I will read on for Rae, Kizabel and Naomi.