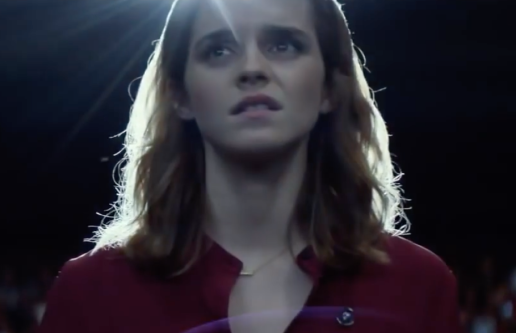 Mae Holland (Emma Watson) gets the job of a lifetime working for a cutting edge tech company called The Circle. She’s only there for like a week before her life is immeasurably better. They have concerts and yoga and health care for her parents. It’s the perfect place for someone like Mae but Alice is about to fall down the rabbit hole.

All I could think about while watching this movie was it’s just kind of… average. Didn’t hate it. But the movie (based on a book by Dave Eggers that I know I’ve read but didn’t remember anything but the one big tense moment) it just feels like it could have been so much more.

Emma Watson and Tom Hanks do Watson and Hanks like things. John Boyega who just has such charisma that he jumps off the screen (for me) is wasted. You think he’s going to be an important character but eh, not so much. Karen Gillian, whom I’ve loved since Doctor Who was great but I had no real idea what was going on with her character. I mean it was obvious she was cracking under the pressure but in the end I was like, “That was it?”

There was also some really nice work by Glenne Headly and the late Bill Paxton as Mae’s parents. There were some good moments with their characters as well. They did more to humanize Mae than Mae did for herself quiet frankly. Maybe that was my biggest problem in the end. As much as I love a good story about privacy and overreaching technology they needed to dial back the shiny gloss and the point making and work on the characters.

The only time I really felt anything was the scene on the bridge and I wasn’t invested in that character either but there was a nightmare playing out/train wreck scenario that I couldn’t help feel bad.

It’s not all empty though. Good performances. Scenes within the circle have a creepy cult like feel. Characters even joke about drinking the kool-aid. I liked the ending even though it felt weird and abrupt. I liked Mae’s clothes. There were some really funny text messages from her fans after she goes transparent if you have time to read them. My favorite being “I was so upset I left social media for two days!”

The Circle has all the makings of a great movie but it never quiet closes the deal for me.

Recommend: 50/50. It’s pretty average. I was hoping for more. It’s more of a good rent at home watch on a lazy Sunday kind of movie.