If they hear you. They hunt you.

Which strikes me as a phenomenally bad time to have a baby but whatever.

John Krasinski and Emily Blunt star in this movie set in the near future where creatures who respond to and hunt even the smallest of sound pretty much decimate the population. Lee and Evelyn’s family live on an otherwise idyllic farm… (Seriously I would move there) with their children and are generally doing a good job of living in their new world. 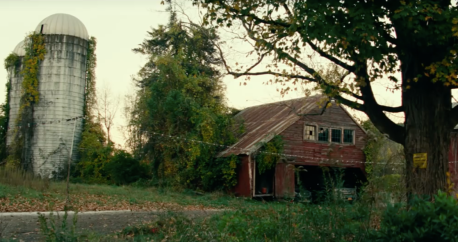 The cast is really good across the board. But I think especially Emily Blunt was a standout with those harrowing silent childbirth scenes. Eek. Depending on how the rest of the year goes she deserves some award love for this one. I honestly thought she was better than Sally Hawkins in The Shape of Water (though I hated that movie so it could be bias).

I thought the kids were good as well and it’s nice to see Millicent Simmonds, whose deaf in real life, get some good Hollywood work.

Anyway the silence of it all is an intriguing idea. Though personally it went something like this…

Movie with extremely long drawn out stretches of silence.

Me: Damn it I have to sneeze!

Me: Now I have to have a coughing fit.

Me: This chair is squeaking. It’s too loud. I can’t move!

I also appreciated how the movie throws you right into it at the beginning. I was a little surprised they went there with a certain something but it does explain, somewhat, the actions in the rest of the movie. So it was a pleasant surprise.

Seriously though? A baby. I mean they had worked it out with something like a soundproof coffin like crib and oxygen mask but that just made me shiver. There’s hope for the future yes but for me I think it’s one of the more generally awful ideas in a while.

Much as I enjoyed the very end of the movie and it’s future implications I thought the night from hell should and could have been shortened in places and while the hunting the sound thing was interesting up close the creature was a little too reminiscent of the demi-gorgon from Stranger Things.

Overall though an enjoyable well-acted film. Not one I would normally watch from Krasinski-  who I must say is so much hotter with the beard. (Wait, that has little to do with the movie. Get back on track.) ***Not his directorial debut (see comments :))

Recommend: Yes. Despite the quick shot of the animal death.