Ant-Man and the Wasp

So I saw Ant-Man on the Wasp last week. We actually went on Thursday night which is very rare. Then I came home and wrote what turned into a long rant not about the movie but about rude people in theaters and how they had come close to ruining the experience for me.

So let me just say I’m fine with kids in movies. Most of them don’t misbehave. Parents know their kids right? But if you’ve got a kid (who looked about 3) who is talking loudly (and you have to repeatedly loudly hush them) from the beginning- if they finally hit the crescendo and start crying right as the movie hits the big emotional beats… They need to be removed. And please don’t let them walk themselves down the stairs while still screaming and stand in the back still screaming until another family members comes down.

Just take them out.

Or maybe don’t bring them to see a movie on what’s essentially a pre-opening night where you know people are likely going to be highly interested in you know, watching the movie.

Also adults congratulations on silencing your ringers like the M&M’s have told you. You know what’s also annoying? Constantly checking your texts without even bothering to dim the screen (and this has been happening a lot recently.) And none of these people ever leave so I doubt their all worried about things or having emergencies! I’ve never understood the whole cellphone thing. We would write up so many people at work because they just couldn’t follow the rules and leave them alone until break! You can’t sit through a two hour movie without repeatedly texting with the full on light?

But how was Ant-Man and the Wasp?

Paul Rudd is not aging Tom Cruise style. Starting to get a little freaked out.

I actually find the de-aging process they keep doing a little weird. Also Michelle Pfeiffer has always been beautiful but I think she looks better now honestly.

Evangeline Lilly kicked ass as I knew she would.

Luis (Michael Pena) should meet the Guardians of the Galaxy because him and Drax telling stories would be hysterical. I love how Luis just goes with the flow including living with a giant ant.

Action scenes all looked good. Performances were good. (There’s a scene in which Rudd is actually being someone else that he just nailed and that one could have gone off the marks easily. He doesn’t get enough credit for his work.) Scott and Hope have great chemistry but I also appreciate that the whole cast just really gels together. I like the family vibe angry dad thing with Hank (Michael Douglas) and Scott. Also Cassie- I could see her growing up and taking on more of her comic role.

The Quantum Realm stuff looked good and I’m guessing it’s going to play a huge role in the next Avengers movie!

I didn’t think the funny always hit the mark. When it did it was mostly character interaction that did it for me and not the actual over-the-top jokey stuff. Also some of the science stuff was a little like- didn’t they change the rules here? How is this working?  I would have liked a bit more explanation on that. 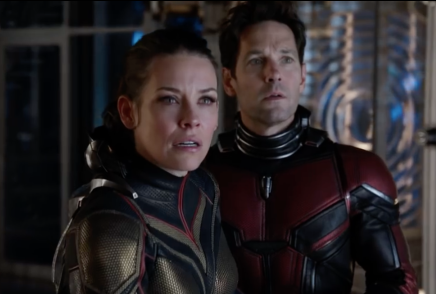 Recommend: Yes. Overall I really enjoyed it. Despite the fact that I occasionally wanted to grow to 60-feet and kick everyone the hell out of the theater so I could watch it in peace.