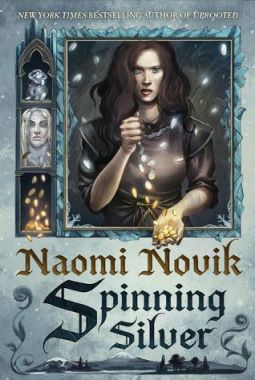 Spinning Silver was one of my most anticipated books of the year and unfortunately, it was a bit of a let-down. I loved Uprooted (the authors last novel) but I think this one could have used another pass at editing.

There’s a lot going on in this story. Miryem is the daughter of a moneylender who steps in because her father is not very good at his job. She’s got a gift and soon attracts the attention of the Staryk King. He’s kind of like the mean old King of Winter Faeries. Meanwhile we also have Wanda (and her brothers) the abused daughter of a local drunk who works for Miryem and her family.

And lastly there’s Irina who links to Miryem through the Staryk silver and winds up married to the Tsar whose got a big old secret of his own that further links the two as Irina and Miryem must find a way to save their lives, their people and their land.

I thought this book was great with the atmosphere. I really loved the part Miryem and her families Judaism played in the story. It was maddening really the way people took money from them and treated them so horribly. I was totally with her. I also thought the descriptions were great of Miryem’s small family town, the larger city where Irina lives and the Staryk mountain.

There’s also some fun magic with mirrors and water and a cool cabin between two worlds that I think was really well written.

I also loved that Miryem and Irina were such bright and brave characters. Wanda too- but I’ll get to her in a moment. Once their stories actually got going I was very interested in them.

The beginning was a bit of a slog. I think I may have read a sampler or something because the first 100 or so pages I kept thinking, read it before. Read it before. Get to something new.

I also could not picture the Tsar as anyone but Kylo Ren! Daisy Ridley could work as Irina now that I think about it. Which is weird because I am completely against Reylo!

And I can’t help feel that everything with Wanda and her family were completely superfluous. Including a very long important part that was from the POV of her younger brother. I just could not bring myself to care about that part of the story maybe because the stakes for the other two were so large? I think you could have lost her and lost nothing from the story that another character couldn’t take over.

Also to each his own but I am seriously side-eyeing that decision Miryem makes at the end.

Recommend: 50/50 My issues with it aside Irina and Miryem’s stories are still fun rides and Novik is a great-detailed writer. I would say if you liked Uprooted pick this one up. If you want to give Novik a try pick up Uprooted!