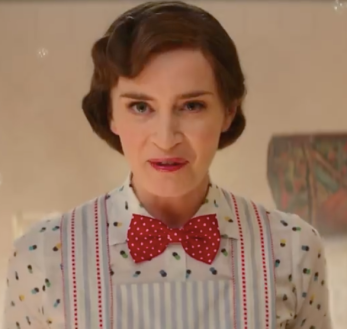 To be honest I’ve always found the idea of Mary Poppins a little bit scary. I mean she’s a near omniscient flying nanny who apparently doesn’t age and can manipulate your mind and reality.  What is not scary about that?

But the remake is on Netflix so I figured… Let’s do this!

And to be honest I still find Mary Poppins a bit scary.

Mary Poppins (Emily Blunt) returns this time to care for the new generation of Banks children right around the time the bank is looking to repossess their beautiful home. Michael Banks (Ben Whishaw) is falling apart after the death of his wife. Mary also has a friendship with a lamplighter called Jack (Lin- Manuel Miranda) who remembers her from the first time around.

Jack was supposed to have a thing for Jane Banks but Miranda played him in such a way that I’m pretty sure Jack was writing smutty Mary Poppins fan fiction in his spare time.

Mary’s also the kind of nanny that gets the kids lost in a fog so they can dance around with strange guys. The animation sequence was kind of cool though the song (A Cover is Not a Book) lyrics felt strangely burlesque and then freaky animated characters told the kids they had been watching them in the nursery forever.

They don’t even say good-bye to her at the end. Jeez.

Anywhere it was an okay movie. There wasn’t any great songs in it that I think will be classics in even ten years time. The part with Meryl Streep drug on way too long and was pointless. In the end I didn’t really connect with anything and it felt strangely cold and removed for a film that’s supposed to be a children’s movie based on a beloved classic no less.

Recommend: I’d say no. Even having never seen the original- past clips and knowing the music- I’d say stick with that one. Though I think I’d still find her a bit scary in the end.