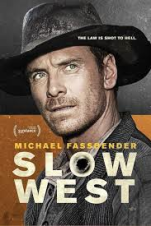 Whenever there’s a Michael Fassbender movie on the table I’m going to take that option. Actually anything really… If he releases a record I’d buy it. Wrote a book? I’ll pre-order. You get the general idea. So I was so happy to finally get a chance to see Slow West this week.

I will say overall I enjoyed this movie. Though the ending was a bummer and the film was slow at times. Fassbender plays a mysterious figure who joins this adorable kid Jay (Kodi Smit-McPhee) who is traveling out into the old West to find his love Rose and her father. Exiles from Scotland who have a two-thousand dollar bounty on their heads. Unfortunately everyone but Jay knows about said bounty.

This is really a really beautifully shot movie in New Zealand and Scotland. Seriously even though there are a couple of those long silent moments I was perfectly happy to fill them up with Fassbender and scenery. Taking the movie as a whole I actually enjoyed the slowness of character reveals. Is Sila’s playing Jay over? Does he legit want to help him? It’s quite clear that something about Jay appeals to Silas. That relationship worked well enough so that at the end Silas actions make sense.

Now if you’re like me and watch the trailer you may get a cute happy vibe. Yeah, no. This is pretty brutal film. People die violently and the shot out at the end had me gasping for reasons that I don’t want to spoil. It’s also brutally honest. Jay is a dreamer a hopeful and perhaps a little bit guilty romantic clashing up against the West.

Recommend: Yes. It’s even available on ITunes which makes this even better. A good new movie that you don’t even have to leave home for you can just sign me up. Now I can start counting the days until I get to see Fassbender in Macbeth.