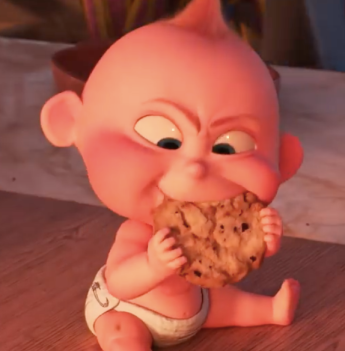 I think it was a couple of days ago I mentioned The Incredibles was the only Pixar movie that never made me cry. That fact remains though I did tear up in the short film before it this time the absolutely adorable Bao. So it’s mostly a technicality at this point!

I also had no idea where Bao (directed by Domee She) was going so when she did what she did I was like, “Oh, shit!” Then I got it obviously. Definitely recommend checking this one out if you get the chance. It’s precious.

As to The Incredibles the new film picks up where the last ended and a super rich mogul and his sister want to help the superheroes become legal again and get back into the spotlight. Only they want to start with Helen (Holly Hunter) leaving Bob (Craig T. Nelson) home to play Mr. Mom.

I enjoyed Incredibles 2 maybe more than the first one because of the whole Mr. Mom (especially Jack-Jack) storyline. The family is where the heart is in these movies and as much as I thought it was fine I didn’t really care about Helen’s story and I thought the whole Screenslaver villain thing had an interesting angle but was fairly obvious…

Which I was a little off on- but not enough to be a surprise.

Also really loved Edna and Jack-Jack (please make it a two-pack Funko!) and Violet who was having boy trouble and seriously pissed at dad came through when her family needed her without a second thought. Disney and Pixar have put out some possible seizure warnings do to certain scenes with bright flashing lights and I didn’t even think about the health implications but one particular scene did annoy me so much I had to turn away.

I mean to be honest The Incredibles 2 is no real surprise it’s a sweet family film about a superhero family (and Uncle Lucius and Aunt Edna) that still made me laugh… and want my own super powered cookie loving baby.

Recommend: Yes. And that includes Bao!