I finish the whole of the Shadow and Bone series this month! I didn’t love it but I am really excited about a Netflix series to come. Holy crap. Nikolai and the Darkling are going to get cast…

And I’m going to realize how wrong my head canon was because I always age people up but that’s a story for another time. This is about what did I learnt from my journey in the Grisha-verse.

This is especially true if she has her great love by her side and no real plan whatsoever. Also probably not a good idea if she has some weird pull to the guy you’re fighting. But really it’s just going to end with her whining about her dead boyfriend screaming for people to bring him back. (What about every body else?) She might mourn for the dead eventually but as long as love lives.

You can make a book work with boring ass leads so long as your villain and supporting characters are awesome.

And they really are. I have to say to you can see the improvement in Leigh Bardugo’s work to because, for me at least, Six of Crows didn’t have this problem and now bring on…

No, I wasn’t thrilled when the Prince of Dullness was brought back but at least it made sense and a price was paid not just oh, boy everyone’s a hot immortal fairy that’s going to live forever. So points for Grisha. 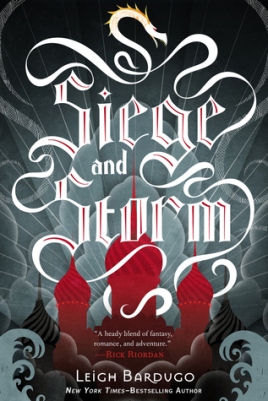 Also- I may have no heart. Or questionable priorities.

Me: So you’re killing all these beautiful animals and mythical creatures or whatever but you won’t kill freaking Mal?

Me: But Nikolai is going to make you Queen! What is wrong with you?

Me: At least keep the ring. Lord knows Mal is not going to help with anything else.

The series was very middle of the road for me. Not the worst thing ever but I also don’t think you need to read it to read Six of Crows or anything else in the Universe. I did it backward anyway.

Recommend: Not really. But it’s not the worst thing in the world either.