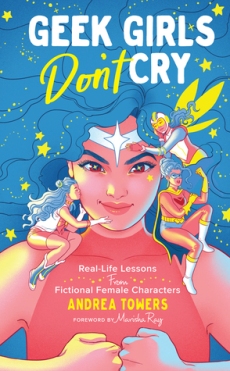 I actually picked Geek Girls up awhile back when all the Dany-related GOT furor was going on. It ticks a lot of my boxes- female characters, mental health representation in culture and how both are perceived.

Geek Girls looks at why we relate so strongly to these characters as well.

It’s a good little book both for a personal read and a gift. There’s a very good run of characters anytime you include Juliet Burke from Lost is a bonus for me.

There’s also a lot you would suspect Storm, Scarlet Widow, Black Witch, Cersei… Show-Cersei anyway. I feel like delving into the psychology of the book version deserves a book of its own and not a couple of pages.

But it’s really interesting to see how these characters are survivors in so many different ways. Many times before we even join them. I think the most important thing is Towers tries to show why people might see themselves so deeply in these characters- for many different reasons. Perhaps reasons we don’t even recognize.

The psychology is not hard to follow and if you do know the characters well you probably won’t be surprised. It also interested me on a wider scale as reading it I can understand why I get so upset when certain characters die or why a fandom might melt down when a character does something that comes off as against what they previously stood for, etc.

Which also taps at the importance of representation in stories and seeing yourself or relating to characters and that fine line writers and creators have to walk now. And the fine line that fans walk- or don’t- of simply letting people be and connect to a story in their own way without casting aspersions or worse.

The only down side was an interview with a comic-book writer whom I had previously read and enjoyed that even in like two total pages came off as totally rude, dismissive and a bit full of herself which admittedly bummed me out a bit. But overall I enjoyed Geek Girls and thought it was bite-sized nuggets of interesting skimming along edge of something more.

Recommend: Yes. If you are at all interested in the ideas. Like I said- it’s a nice gift idea as well.