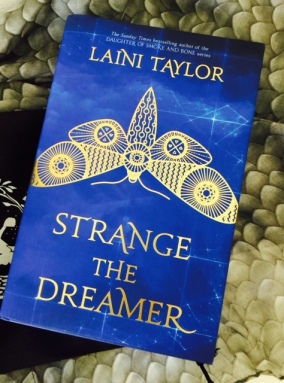 Lazlo Strange, librarian and former orphan, dreams about the lost city of Weep. So lost in fact that Weep isn’t actually the name. The real name disappeared from everyone’s minds, even Lazlo’s, long ago. He believes that research and dreams are all he will ever have despite other librarians telling him to get out there and get a life.

So it’s a wonderful surprise when one day a group of traveler’s appear with a mission- to travel to and save the lost city.

I really loved this one. It’s my first Laini Taylor read but I can tell you that I will definitely be hitting Daughter of Smoke and Bone soon. I had been looking forward to this for a while but then I heard one of my favorite Youtubers DNF’d it so I worried a bit. Then I saw the size and since I was kind of in the middle of a reading slump I worried a little bit more.

Yet Strange the Dreamer just pulled me in and immersed me in the world. I thought Lazlo was great. I mean he gets his nose broken by a book of fairy tales. He’s sweet, kind, thoughtful the type of person who helps people for no reason and continues to help them even though they really don’t deserve it.

I definitely don’t want to give too much away especially not what’s really going on in Weep. It’s one of those stories that unfolds slowly but for me it wasn’t a case of eye-rolling let’s get to the point here but more, “It’s one a.m. and I need to keep reading.” Taylor is fantastic. I loved the way she brought the story together and made it feel like a living breathing thing. All the secondary characters were great.

There is one character that brings you through the history and the heart of the conflict between the Gods and man and I think that was incredibly important to my enjoyment of this story. Because as much as you might like some characters more or root for them it does a good job of showing both sides and what was lost by everyone. Also the same character provides some hope even while telling this story that everyone might be able to move past the history of darkness and bloodshed.

The only concern I had was the end. There were certain elements that when they played out did seem obvious and while it definitely sets up the next book (it’s a duology) I kind of wish she had gone another way. Like my interest in the overall story/mystery/history 100% totally there. My interest in the potential conflict between two of the characters 95%. My interest in the romantic element to that storyline 50% or less.